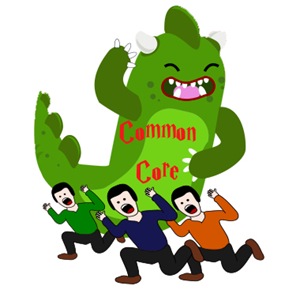 For quite some time now, our kids have been tormented by a shadowy being.  This creature has  haunted them at every turn.  It has scared them and hungers for their brains – among other things.  I wish I could say that this creature is some monster of legends, but unfortunately it is quite new.

This monster’s name is Common Core.

I’ve written about Common Core before, but unfortunately it is still haunting our kids.  Some monsters are created in a lab.  Common Core was created by bureaucrats and people who were looking to turn a profit off the educational system.  Some monsters break loose of their confines and wreck havoc while their creators stand helplessly by, lamenting their actions.  Common Core’s rampage is being watched by its creators, but they are cheering it on.

Recently, New York State Education Commissioner John King held what was to be one of many forums to show how Common Core really isn’t a monster.  Instead, he was greeted by parents understandably angry about how their kids’ education was being ruined and how their kids are hating and not loving school.  (Common Core ostensibly is designed to get kids ready for college, but a child who learns to hate school won’t choose to attend college.)

King’s reaction to seeing angry parents?  Shut down all forums and blame it on "special interests."  (Translation: Parents weren’t just taking my message and shutting up about their complaints.  How dare they continue to complain!)

After much more complaining, John King and New York State Education Department (NYSED) decided to host some more forums, though with radically changed formats.  The first of these new forums started last week.

In other words, the 4pm start time excluded parents (especially working parents) and teachers.  These are two of the biggest groups of people who might have complaints about Common Core and New York State’s implementation of it.  These are also precisely the "special interests" that King wanted to avoid.  (B was able to make it but only because her father was able to pick up the boys from school.  I was unable to attend as I couldn’t leave the office so soon.)

Eventually, the time was extended to 7pm to give people more time, but the start time was still an issue.

The parking situation was another issue.  The school building that was chosen could not handle the influx of people trying to park.  For one thing, it was a SCHOOL and thus had kids trying to leave at the end of the day.  You know, right when the forum was due to start.  There were also after school activities planned that would have complicated issues.  The principal wound up cancelling all after school activities, but parking remained and issue.  People had to park a half mile or more away and walk to the school.

To make matters worse, the governor (himself a huge Common Core supporter and the person who said that public schools might be shut down if they don’t raise their test scores) made sure there was a big police presence.  Again, the stated goal of this was to keep the peace, but exactly what were they envisioning happening?  Hordes of parents, teachers, and students rushing the stage screaming for King’s head on a platter?

At every turn, the victims of the Common Core monster were themselves being treated like monsters.

The forum wound up going off smoothly and a lot of people voiced their opinions of the Common Core beast.  Interestingly, King refused to look up at the speakers.  For someone who apparently wanted to put on a show about caring what parents, teachers, and students were experiencing, he certainly didn’t put any effort into it.  The only time he looked at a parent was when the parent called him on his lack of eye contact and TOLD him to look at her.

(For more on the forum, read B’s post today: Advocacy on the Go.)

After the forum, King declared that he had heard all of the concerns and would examine the test schedule.  A couple of days later, NYSED announced that a test would not be given and the media hyped this as a victory for those against Common Core and high stakes testing.

The test in question is only being canceled for honors students who are taking a different test on that day.  This isn’t a great victory or even a small step in the right direction.  This is a token offering that is being made in the hopes that this one tiny test cancellation will make the parents, teachers, and students of New York State forget the devastation that the Common Core monster has wrought.  This is righting one garbage can when a whole city lies in ruins and saying "All fixed!"

John King and NYSED might still listen to parents, teachers, and students and fix this mess, but you’ll forgive me if I don’t hold my breath.  I want to be optimistic.  I really do.  The realist in me, though, thinks that more money will go to charter schools run by businesses looking for a profit, more money will go to big businesses like Pearson and InBloom looking to turn a profit off of students’ education and/or information, and students will remain last people actually considered when those in charge think about the education system.  Sadly, this monster movie is far from over.  The monster is still on the loose and very few people in charge seem to even care about the devastation it is causing.

NOTE: The monster image above is "godzilla danger" by morlok and is available from OpenClipArt.org.  (I modified it to add the "Common Core" text to it.)