The Purpose of Social Media 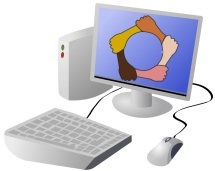 I’ll admit it: Sometimes I wonder why I spend time on social media.  All too often, it feels like a treadmill of giveaway entries, product tweets, and photos of locations that – while beautiful – I’ll likely not see in person anytime soon.  Often, it can feel like time spent on my "social media life" can take away from time spent in my real life.  Furthermore, speaking on social media can often feel like you are trying to whisper in the middle of a hurricane.  Something that happened on Thursday, however, reminded me of the real purpose behind social media.

I was getting ready to make dinner, when I saw this series of tweets from SelfishMom.  (Screen captures are linked to the actual tweets.)

We’ve known Amy for years.  We’ve seen her at various Disney World events as well as at BlogHer.  In addition, B spoke with her quite a lot at SheStreams one year.  Beyond the face-to-face meetings, though, we all tweet to each other quite a bit.  B and her send messages to each other via Facebook as well.

So when I saw that Amy was having blog problems I asked if I could help.  After all, I considered Amy a friend and couldn’t leave her in a fetal position surrounded by empty potato chip bags and Hershey bar wrappers!  I was able to talk her through some debugging steps to solve the issue.  In the end, it wasn’t a hacker and we were able to recover all of her posts.  How we did it will be a second blog post.  Look for that on Wednesday.

Back to the question of "why social media", though.  At one point, Amy asked me how much I charged per hour.  She mentioned that she wouldn’t want someone to expect her to write for free.  She was right.  I do freelance work and, when I do it, I expect to be paid.  However, this was different.  This was a friend in immediate need.  Helping a friend recover their blog is a lot different than, say, redesigning a website (even if the site I’m redesigning is a friend’s).

In the end, that’s what social media is all about: Forming friendships with people whom you would never have met were it not for the Internet.  Amy lives in the same state as we do, but the chances of us running into each other (much less forming a friendship) sans Internet/social media would be slim.  Add in the other people we’ve met online who hail from across the coast or even different countries and it’s easy to see the real power of social media:  Helping people befriend people online when you would never have even known about them otherwise.

Though I don’t get to see my social media friends in real life as often as I’d like (and some I haven’t met in person yet but really want to), I enjoy spending time chatting with my online friends.  I like seeing what they are up to, sharing their highs, comforting them if I can during their lows, reaching out if I need help, and helping in turn when my friends need it.  Social media is about the people you meet.