Gold Medal For Lost Teeth At The Sled Olympics

The Winter Olympics might be in full swing in Sochi, but back here we are having some winter events of our own.  There’s the meter deep snow drift shovel, the icy driveway skate, and the ever popular car figure skating (aka maneuvering your car out of a snowed in driveway into a snow-narrowed street without hitting the snow banks or parked cars).

To find some actual fun in the snow, we went to a local park that has a giant hill.  During the spring and summer, the boys love running up and down this hill.  I figured this would be the perfect place to sled down.  JSL immediately began to get fearful.  He’s afraid of heights (or so he claims) and this was definitely high up.  NHL took the first sled ride and loved it – shouting with joy the whole way down.  JSL decided to brave a trip and shouted as well, but more out of fear than enjoyment. 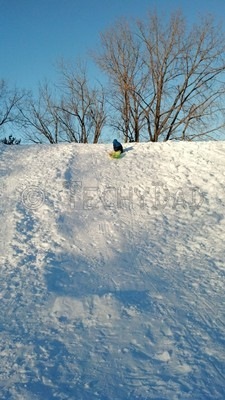 Of course, I had to have my go and – always thinking social media – filmed a first-person view going down.

Hard sled + bounces + my not-so-young anymore body = OUCH!  I definitely envied another family that was there with inflatable sledding devices.  I could have used some of that cushioning power.

We kept at it for awhile and I even came up with a solution for JSL.  I positioned the sled halfway up the hill and stood in front of it to keep it in place as he got on.  When he was ready, I stepped aside and he went down.  This gave him enough height to make for a fun ride, but not so much to trigger fear.  Of course, this meant less opportunity for me to take photos of JSL in any pose except for his apparently traditional post-sled snow angel. 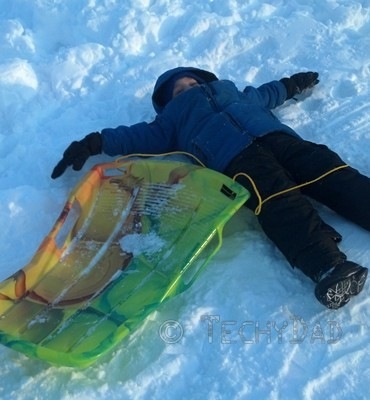 NHL, for his part, tended to gravitate to the more dangerous sections.  Some people had fashioned sled jumps and NHL wanted to try them out.  I let him and he had a blast. 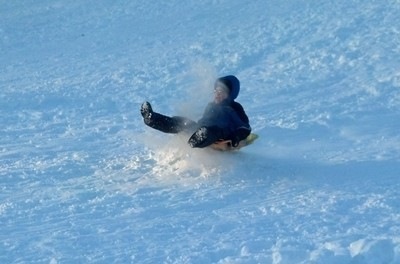 One jump he caught just right and wound up with some serious air.  I was at the top of the hill at the time so when it was his turn next, I had him wait until I got into position so I could snap this photo. 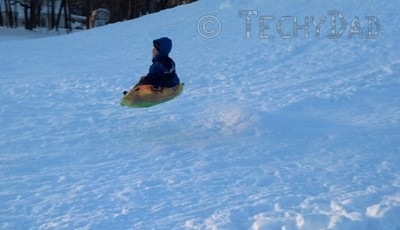 Unfortunately, right after I took the photo, NHL got up from where he landed and yelled that he had hurt his nose and glasses.  I looked him over and he was fine – if a bit snow covered, but then he realized something else was wrong.

He had lost a tooth!

Yes, it was a wiggly tooth that was due to come out.  (Insert sigh of relief from me here.)  However, it wasn’t with him.  It was somewhere near where he landed.  Finding a small white tooth on a patch of white snow was going to be nearly impossible so I let NHL know that we’d look but we probably wouldn’t find it.  Two minutes in, I was about to call off the search when NHL proclaimed that he found it.  Sure enough, he plucked something small off of the ground and had his tooth back. 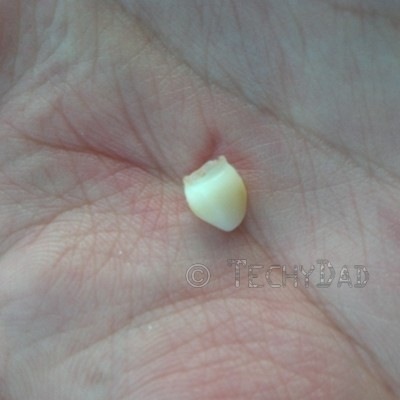 I took it and firmly held onto it until we got home.  The tooth fairy visited him that night and gave him his own gold medals… I mean coins. 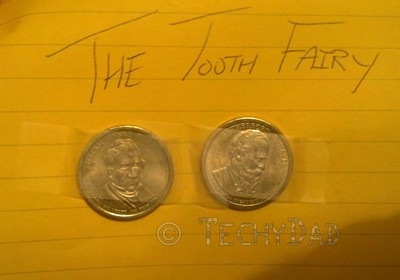