My Not So Tiny Death Star 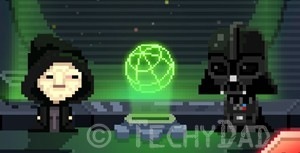 Over the past week, I’ve had a new addiction.  I have to confess, I’ve turned to the Dark Side.  The Emperor and Lord Vader enlisted my help in constructing a Death Star.  With it, they can rule the galaxy with an iron fist.  Death Stars don’t come cheap, though, so we’re renting out space.

With residential levels, I can get galactic empire citizens (also known as Bitizens due to their purposefully pixelated look) to move in.  Then, I put them to work on service, food, recreation, and retail levels.  As they work, they earn money which I can spend on the Imperial levels to complete missions that Darth Vader and other Imperial officers assign me.  I also help out when the occasional rebel spy infiltrates our facility.

This is a wonderful game.  There are Star Wars references aplenty from Watto’s Wares to Mos Espa Cafe to Mandalore Apartments.  Some of the characters that you encounter will be random folks (both human and Star Wars aliens) and others will be characters from the Star Wars movies.  With hundreds of levels and characters currently available, one can play this continuously for weeks before running out.

I would definitely recommend this for Star Wars fans of any age.  Both of my boys (7 and 10) have been constructing their own Death Stars.  The only limitation would be that some reading in the game is required so be prepared to help read it to small kids.

To close, here is my current Tiny Death Star (or current as of the time I stitched these screenshots together).  Warning, it is a little long.