Battling My Own Brain 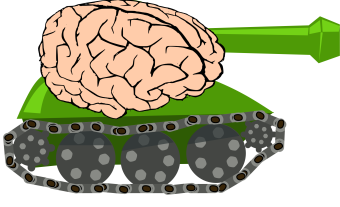 Over the years, I’ve fought long, protracted war.  This wasn’t a conventional battlefield, though.  This war took place entirely within my own mind.  I had to fight tooth and nail (synapse and neuron?) to overcome some challenges and get to where I am today.  Meanwhile, I still have many challenges to overcome in the future.

Back in high school, I found my brain getting stuck constantly.  By this, I don’t mean that I wouldn’t be able to come up with an idea.  Instead, I would pour over every detail of a social interaction that I had made.  I would critique it in every way possible, berate myself for missed opportunities or for saying/doing the wrong thing, and would take situations completely out of context.  These "hindsight reviews" could last for days and would completely cripple me socially.  After all, if I was completely wrong in my actions in one situation (as judged by me later on) then how could I possibly be sure that I’d be correct in another action.  Combine in fear of bullying and the paranoia that it caused and it isn’t hard to see how my social development was stunted.

This "stuck brain" phenomena would also manifest itself when I worried about something.  As I went over the topic over and over again, the worry would grow more and more unmanageable.  Even if there was nothing I could do at the moment, my brain would focus on the problem and wouldn’t stop.  Thankfully, I eventually learned to segment my worrying and put aside items when there wasn’t anything I could do about them at the moment.  This can often be misinterpreted as me not worrying about something, but it is more of a self-defense mechanism.  If I didn’t put some worries aside, I could easily revert back into my worry-obsession behavior.

In college, I vowed to force myself to be more social.  I joined an organization whose sole purpose was the throw big parties – exactly the kind of social situation I wasn’t comfortable in.  It was my way of confronting my comfort zone and breaking through it.  However, while I made strides in my general social development, another battle raged on.  This battled was complicated because it involved the opposite sex.

College Me was living away from home for the first time and I found myself surrounded by all kinds of people.  As will inevitably happen to college kids, I developed crushes on some of my fellow students.  However, whenever I thought about acting on the crush, I found myself paralyzed.  I would go over a plan to ask a girl out, but could only think of the horrible things that might result.  I had just escaped high school – where I was made fun of mercilessly – and the specter of being mocked by my peers again haunted me.  Inevitably, I would over-think so much that the girl I had a crush on would begin dating someone else.  I had gone from doubting my actions after the fact to doubting my actions before I took them.  I might have won the general battle, but I was clearly losing on this particular front.  After college, I got a job and, a few years later, met B.  Unlike with all the other women I had tried to ask out before, everything seemed to come naturally to me.  Part of this was definitely due to a greater maturity and self-confidence due to being successful in my job.  A big part, however, was just that I could sense right from the beginning that B was "the one."

With that battle won, you might think that the war in my head was over.  It wasn’t, though.  Even in the present day, I tend to have two main "brain battles."  The first deals with Asperger’s.  Often I’ll get fixated on something, such as reining in the chaos that two young boys playing can cause.  Meanwhile, NHL will fixate on something else and we’ll have an Aspie-Aspie clash with B caught in the middle.

As hard as that is to deal with, there’s something else I deal with on a regular basis.  "Bad thoughts."  This is what I call it when my brain seems to try to interpret others’ motives in the worst possible light.  A voice in my head might try telling me that some people don’t care about me or that they don’t need me.  I’ve learned not to listen to this voice.  Though it always attributes the negativity to others, it is really the voice of self doubt.  It is the ghosts of the battles I’ve fought over the years coming back and trying to take hold once more.  I hesitate to call it depression – mainly because it never gets that bad and I wouldn’t want to minimize someone else who deals with actual depression.  From what I’ve heard online from people who have depression, though, this "bad voice" shares many of the same characteristics.  It belittles my accomplishments, attempts to sabotage my relationships with my friends and family, and convinces me to bottle up my feelings instead of opening up about them.  (That last one is made worse by my Asperger’s "Emotional Cage.")  When the "bad voice" is active in my brain, I will often sulk and stew over even the smallest of slights.  I’ll find myself unable to focus on other topics.  This is the one instance where a form of my "worry obsession" still overtakes me easily.

I’ve seen NHL deal with this also.  If he is yelled at to stop doing something, he’ll often mutter to himself over and over.  When I listen to him, it frighteningly sounds like what my "bad voice" says to me.  Nobody loves me.  Nobody understands me.  The world is against me.  People are doing things to hurt me on purpose.

I’ve learned to suppress this "voice" so it doesn’t come out of my mouth – even when it is screaming in my brain.  NHL, meanwhile, hasn’t.  Perhaps this is a good thing, though.  Maybe I can use this as an opportunity to help him learn to deal with his own "bad voice" in his head so it doesn’t turn into a problem.

NOTE: The "brain tank" image above is a combination of "brain" by trubinial guru and "cartoon tank" by rg1024.  Both images are available via OpenClipArt.org.