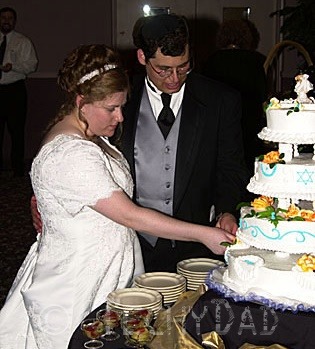 People don’t usually think of thirteen as a lucky number, but today it is.  Thirteen years ago today, I became the luckiest man in the world because B said "I do."  The actual day is a blur.  I know that I walked up an aisle.  B circled me a few times during the ceremony while our mothers lifted her train – practically causing her to moon everyone.  I believe food was served, but I know we didn’t get to eat any.  Many people congratulated us, but I don’t remember any actual conversations.  Many photos were taken and much dancing was done.  In the end, we were exhausted.  Happy, but exhausted.  The next day, we were off to Disney World for our honeymoon.

In the years that followed, we’ve enjoyed life together, welcomed NHL into the world, learned the ins and outs of being parents, said hi to JSL for the first time, watched our kids grow up before our eyes, have geeked out together as often as possible, and have spread our wings on social media together.  These past thirteen years have seen the most stressful days of my life.  (Thank you for nothing, febrile seizures!)  However, I wouldn’t trade them for anything because they’ve also been the happiest days of my life.

Happy anniversary, B.  Here’s to thirteen more and many more after that!