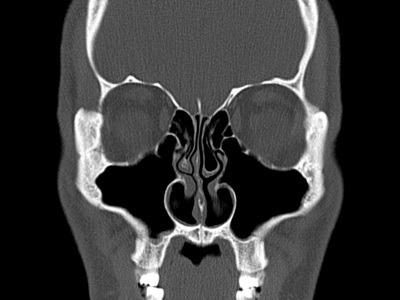 For the past week or so, I haven’t been sleeping well.  My nights are filled with stressful dreams that leave me exhausted in the morning.  There are two reasons for this.  Unfortunately, the solution to the first reason is, in fact, the second reason.

Let me back up a bit.  I’ve always had a problem breathing through my nose.  One nostril seems perpetually stuffed up.  Almost twenty years ago, I had surgery to help correct this.  Unfortunately, one of the big helps would have been fixing my deviated septum and the insurance company at the time deemed that "for cosmetic purposes only" a day before the operation.  While the surgery (cutting my noses’ turbinates) helped, my problem just got worse over the years.

These days, I live with a near constant pressure in my nose.  It will often feel like it is about to stop but just keeps going on.  Medicines don’t help and it is affecting my sleep.  (Though my sleep study found that I have a normal sleep pattern.)  I’ll often wake up after a good night’s sleep feeling tired instead of well-rested.

My doctor finally decided to give me a CAT scan and immediately saw the problem.

For those who can’t immediately read CAT scans, here is a marked up version: 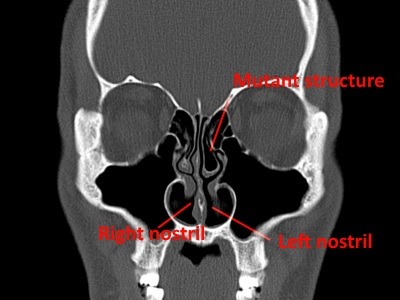 My right nostril is a lot narrower than my left nostril.  My doctor informed me that this is because a structure in my nose tried to form a third breathing passage instead of what it was supposed to form.  (Three nostrils with only two openings – Worst. Mutant. Superpower. Ever!)  This pushed the left side of my nose over to the right side, narrowing that passage down.  Once any irritant is added to the mix (allergies, cold, etc), that passage goes from "narrow stream" to "completely blocked up" very quickly.

The good news is that this problem is fixable.  I’m scheduled to have surgery at the end of this month to take care of this issue.  Much like JSL’s surgery, I’ll be put under while the doctors perform various procedures.  This time, insurance is covering a deviated septum operation.  Hopefully, this will open up my nasal passages and allow me to breathe easier.

Which leads us to the second reason why I’ve been unable to sleep well:  Anxiety.

As the surgery date approaches, I’m getting more and more anxious.  I’ll admit that I like being in control of situations.  Being out of control scares me.  Being put under anesthesia while people slice into you is about as far from "in control" as you can get.  Add in that my brain keeps coming up with bad things that could happen and my stress levels are rising day by day.

I know, intellectually, that this is similar to my fears about flying.  Completely overblown and thanks to various shows/movies depicting surgery (and air travel) as something that regularly goes wrong.  After all, a completely uneventful surgery that goes as planned or a flight that doesn’t even hit horrible turbulence are just boring when depicted on screen.  Still, my fears aren’t listening to my intellectual retorts.  They just see "big scary surgery" looming ever closer.

As much as I’m dreading Surgery Day, I’m also hoping it gets here quickly so it can be over quickly.  Then, hopefully, I can actually get a good night’s sleep.