Rapid Charging With The Droid Turbo 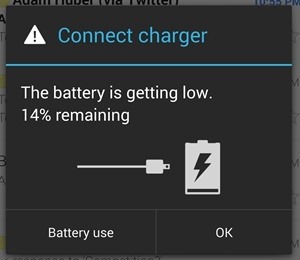 DISCLAIMER: My wife received a Droid Turbo due to being a member of the Verizon Life Style Bloggers.  Since I was in need of a new smartphone, she gave it to me.  The opinions expressed below are my own.

When you’re out and about, the last thing you want to see on your smartphone is:

Even if you brought your cable, you might not have much time to recharge your phone.  You might gain a few minutes of use but you can wind up fighting a losing battle as your charging times don’t give you enough battery life to make it to the next charge.  When my wife received the Droid Turbo to review – and gave it to me – I wanted to put both its long battery life and rapid charger to the test.

One day, while out, I decided to put the battery through its paces.  I took photos, played battery-draining games, and used the phone as much as possible.  The end result was that my phone went from 100% to 14% in 12 hours.  If this seems like a short time period, note that this wasn’t "typical usage."  I was intentionally trying to use up the battery’s charge.  My old smartphone would, if I was lucky, probably have lasted half of this time with this level of usage.

Once the indicator reached 14% and the warning was popped up, it was charger time.  I plugged in the rapid charger and kept an eye on the percentages.  A half hour into the charge, the battery had gone from 14% to 46%.  This was a whopping 32% in only 30 minutes.  Basically, this half hour of charging gained me almost 4.5 hours of extreme usage.  Were I attempting to conserve battery life (instead of trying to drain the battery as quickly as possible), a half hour charge using the rapid charger could mean having enough juice to last the rest of the day.

Needless to say, I’m impressed with the results.  The Droid Turbo’s rapid charger definitely lived up to its name.  If you are out and about and your Droid Turbo is running on fumes, a short recharge break can give you enough battery charge to last you a good, long time.