Extreme Geekery: Give Me A Lever Long Enough… 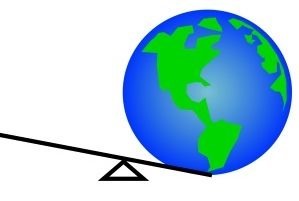 Archimedes once said "Give me a lever long enough and a fulcrum on which to place it, and I shall move the world."  He was waxing poetic about the power of the lever.  The lever is one of several simple machines along with the wheel and axle, the pulley, the inclined plane, the wedge, and the screw.  These machines can help to perform feats that a man acting alone using only his own strength couldn’t hope to achieve.  They can also be combined to increase the machines’ abilities.  Of course, I don’t think Archimedes really meant that one could set up a lever and move the entire Earth.

But could you do this?  How long would the lever need to be?

Obviously, there are some stumbling blocks to our plan.  First of all, there’s no ground in space to position the lever’s fulcrum.  Even if we made a giant lever and somehow put it against the Earth , pushing down on one side would cause the entire contraption to drift through space.  There’s also the problems that gravity would cause – the gravity on the lever close to the Earth would be more than the gravity further away.  What’s more, unlike a lever on Earth, we’ll be battling against the gravity of the Earth orbiting the Sun, not an object resting on the Earth.

All of this could, at least, seriously mess up the calculations for how long our lever would need to be or, at worst, make the whole affair pointless.  Since there’s no such thing as "pointless" when it comes to Extreme Geekery, .  Let’s simplify things, by making two assumptions.  First will be some "ground" and Earthlike gravity.  Our fulcrum will rest on the "ground" and will push up against the Earth attempting to lift it as if it were just an extremely large rock.  The second assumption is that there isn’t any other source of gravity to mess things up.  We’re ignoring the Sun, other planets, the Moon.  Everything.

So, how long would a lever need to be to move the world?  The formula for this is quite simple:

The weight of the Earth is easily Googled: 5.972 x 1024 kg.  This only leaves us the force pushing down on the other side.  Given that Archimedes said he could do it, I’m going to say that only one person should attempt it.  No cheating and gathering an army or pushing on it with rocket thrusters.  We’ll do this see-saw style and sit the person on the other end of the lever.  We’ll have the person be 100kg – perhaps slightly overweight but not unrealistically so.

Now how long is the "pushed down" side of the lever?  Well, we have:

(Side note: In case you’re wondering where those 9.8s came from, force equals mass times acceleration.  F = ma.  This means that the forces we need for each side of our lever equation are really the weight of our objects times the acceleration – our faked Earth gravity down.  Also, yes I know they cancel each other out, but I’m including them in there for completeness.)

Light is the fastest substance known.  The speed it travels at can’t be matched by anything we know of.  That’s why we measure distances in light years – or the distance that light travels in a year.  One light year is 9.46 * 1012 km.  This means our side of the lever would need to be about 4.15 * 1013 (or 41.5 trillion) light years long.  How long is this?  Well, it’s certainly longer than the Milky Way.  That’s 100,000 light years across.  It’s even bigger than the diameter of our local supercluster of galaxies.  That’s 110 million light years.  In fact, our observable Universe is only 45.7 billion light years so our lever would need to be over 908 times the length of the known Universe.

Ok, so one person probably couldn’t do it alone – even by Extreme Geekery standards.  But what about the power of teamwork?  If every human on Earth got together and sat down on the lever, how long would it need to be to move the Earth?

All humans together weigh 632 billion pounds or 286.67 billion kg.  Plugging this into our formula above means that our lever would need to be 1.37 * 1017 km or about 14,474 light years.  This distance is much more reasonable.  Yay teamwork!  Still, maybe we could improve the results.

All of the biomass on Earth (except bacteria – those guys claim to have lost their invitations) hopped onto our galactic see-saw now. 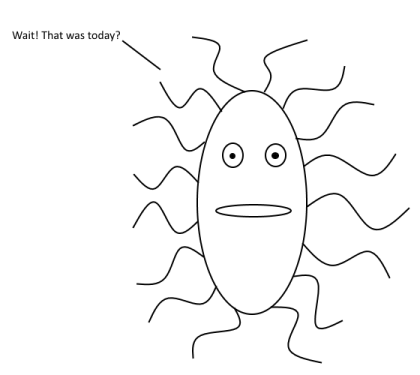 Of course, even a "mere" 741 light years is a long distance for a lever.  As much of a genius that Archimedes was, he might have overestimated himself when it came to levers.  Unless…

NOTE: The Earth image I used is by stevepetmonkey and is available via OpenClipArt.org.