The Family That Minecrafts Together 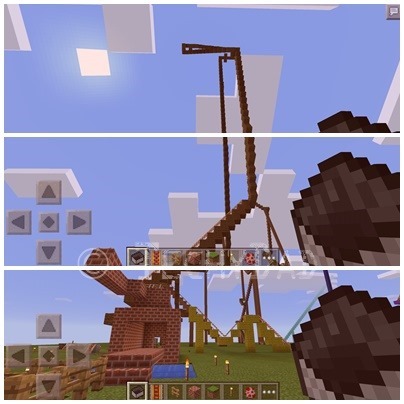 About a month ago, JSL came home from a play-date proclaiming that he loved Minecraft.    We had intended on introducing his older brother to the game at some point figuring that he’d enjoy the building aspect.  We didn’t expect his brother to fall in love with it first.  Still, we purchased Minecraft: Pocket Edition to put on their tablets and off they went building.  After doing some research, I even set up a PocketMine server so we could all play in the same world.  (After doing this, I realized that we could just pop into each other’s worlds while we were all on the same Wi-Fi network. ) I also downloaded some maps for the boys to start them off with some creations to build on.

After awhile, I began to get curious about just what they saw in Minecraft so I installed the game and got a theme park map installed.  Soon, I was having fun on the pre-made rollercoasters.  The boys quickly jumped into my world and we all ran around in-game trying out coaster after coaster.

As I tired of simply riding what others had built, I decided to see how easy it was to build coasters.  I started to build my own coaster and was hooked.  I made a "Coaster To The Sky."  It went up as far as Minecraft would allow me to build – just about touching the clouds – and then raced down.

Every time I thought I was done, I got another idea to add to it.  Eventually, I had the cart end up dropping into a deep pit where it landed in a room floored with cake. 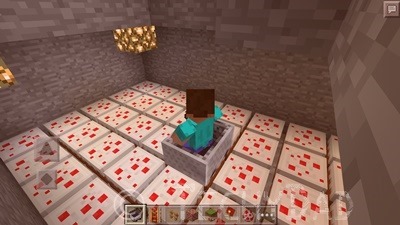 JSL tired of trying to build rollercoasters and asked me to install a castle map that he had found.  As he played, I jumped into his game and looked around.  When he told me that the castle was off-limits for my building, I walked into the lake and began to dig.  Eventually, I was able to build a cavern underground that was dry.  I improved on my new underground lair, but tired of the water constantly threatening to flood my land.  So I blocked off the entrance, dug a tunnel to another, drier, section, and expanded my underground operation.  At this point, I have stairs, a bedroom, a dining room, and a few spare rooms whose purpose I haven’t decided upon yet. 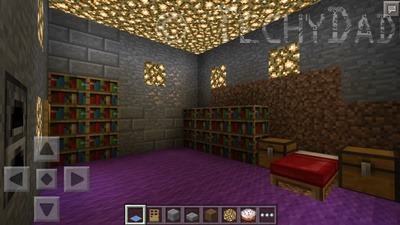 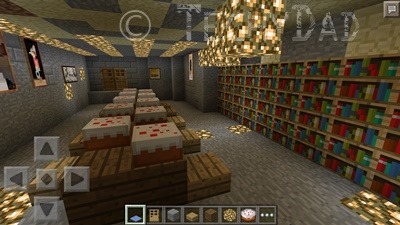 Even in Minecraft, JSL is a bed invader.  He decided to come into my area and lay down on my virtual bed. 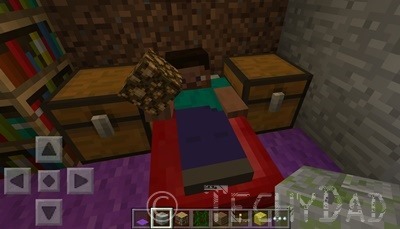 The only downside to Minecrafting underground?  Heading to bed immediately afterwards and feeling seriously claustrophobic.  Every time I closed my eyes, all I could see were the dark stone walls of Minecraft’s underground surrounding me with no way out.  I felt boxed in which doesn’t help a good night’s sleep.  In the future, I need to remember to stop playing long enough for the trapped feeling to pass.  (I’ve since made my rooms larger to avoid any future in-game claustrophobia.)

Are you or your kids hooked on Minecraft?  If so, what’s the coolest thing you or they have built in the game?