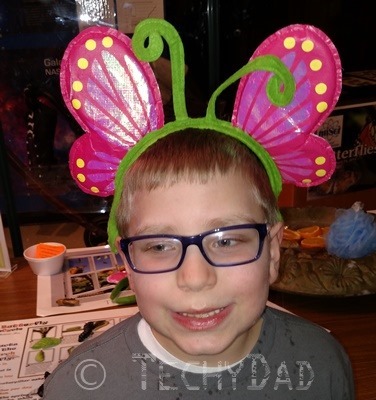 For the second year in a row, we went to the Museum of Innovation and Science in Schenectady, NY to see their butterfly exhibit.  As with last year, NHL didn’t want to go into the butterfly house for fear of hurting them.  Eventually, he did go in and look around, but he was clearly nervous about being in there and wanted to leave ASAP.  (I’m proud of him for trying, though.)  As for JSL…

I’m not sure what species of butterfly this is.

This one got friendly and spent some time on my finger. 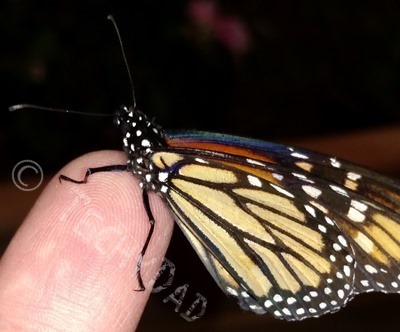 After the butterflies, we walked around the museum for awhile.  Honestly, the exhibits are ones we’ve already seen and done, but it has been awhile and the kids loved seeing them again.  My favorite moment came when NHL went to the drums.  Now, he plays the drums in school and is pretty good.  He has a pretty good musical ear and descent talent.  This drum machine has headphones that you put on so you can hear your drumming while everyone else hears just the light tapping of your sticks on the pads.  (Side note: We need one of these at our house NOW!!!)

As he’s drumming along, this other family is looking at an exhibit nearby when their little girl (who looked about one year old) looks at NHL.  She instantly becomes mesmerized by him and was just staring at everything he was doing.  I let NHL know that he had an audience and he offered the little girl his headphones so she could hear his drumming.  The girl’s father helped put them on her and NHL started drumming again.  The girl’s eyes seemed to glaze over as if she were trying to tune everything out but the beat that NHL was playing for her.  She had this big smile on her face, enjoying the private concert.

Then, NHL offered her the drum sticks.  The father helped her into the seat and showed her how to hold the sticks.  She tapped the stick on the pad and quickly understood that it made that noise.  As she started regularly tapping the drum, I remarked to the girl’s dad (just before NHL dragged me off to another exhibit) that it looked like he had a drummer-in-training.

I just loved how NHL handled the entire thing.  That drum exhibit is probably one of his favorites – especially since he loves playing real drums so much.  He was not only willing to give it up, but recognized the enjoyment that the girl got from watching him and decided to forgo part of his own experience so that she could enjoy it more.  Then, he gave up his very seat behind the drums so that the little girl could drum away herself.

There are those that stereotype people with Asperger’s as always self-centered and never caring about others.  This couldn’t be further from the truth.  I just love it when NHL takes that stereotype and smashes it to pieces – especially when he keeps a pretty good beat as he drums the stereotype away.