The Time For Cable Cord Cutting Has Arrived 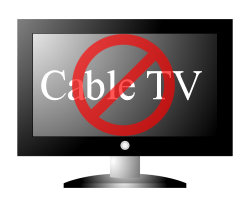 I’ve written a lot over the years about coming close to cutting the cable cord.  We’ve come close many times but pulled back from the brink.  Now, however, is different.  We’ve made the decision and will give up cable TV at the end of this week.  Soon, we will embark on a new journey as cord cutters.

First, a little history, though.

The cord has been on the chopping block since 2009.  At that time, I concluded that cutting the cable wouldn’t save us enough money.  Online video at the time was tempting, but just didn’t offer enough for the price.  One year later, I reevaluated cord cutting.  Then, the conclusion was that Netflix and our local library were serving us well, but still not well enough to switch.  (Perhaps in a moment of prescience, I declared: “I’d probably be safe to declare that we won’t cut it [cable] in the next year, but I wouldn’t be as sure about the next 3 – 5 years.”  Four and a half years later, and the cord is being cut.)

Two years ago, we moved closer than ever to cutting the cord.  Even though I figured that we would save a lot of money every month, the lure of cable TV content was too strong.  That, plus Time Warner Cable cut us a good deal.  As the deal was good for two years, this pushed the cable cutting decision out to this year.

And so we come back to the present day.

We received a note from Time Warner Cable letting us know that our current deal was expiring.  Replacing it would be a new deal that would cost us over $20 more for the same content.  Normally, this would be where we would tell them we wanted a better deal and they would provide one.  Instead, they held firm.  This *WAS* the better deal.  One representative even told us that the retail price of our package would be about $190 a month.  Just because you set a price for something doesn’t mean it’s worth that, though.  I’ve done my research and know just what we watch, what we can do without, and what it would cost to keep up with shows that we want to keep up with.

For quite awhile, I had been compiling a spreadsheet of the shows we watch, where we could get them online, and how much it all would cost versus cable TV.  They tended to fall within five different categories.

These shows were available for free if we hooked up an antenna.  Of course, cutting cable also means ditching our DVR so we would be stuck with tuning in when the station said to tune in.  If we were up with a sick kid when The Big Bang Theory was on, we could kiss that airing goodbye.  Luckily, most networks post their shows online and Hulu Plus could give us convenient access to these.  This way, if my kids want to watch the latest episode of The Flash, they don’t need to stay up past their bedtime.  We can just stream it a few days later.

Many shows are already on Netflix.  Often, this might mean being a season behind everyone else, but for many shows I can live with that.  Plus, we already subscribe to Netflix’ streaming video service so we’re good to go here.

For some shows, Hulu and Netflix aren’t an option either due to availability or my impatience to see the latest episode.  For many of these, buying the individual episodes from Amazon VOD is the path we’ll take.  Shows cost $2.99 an episode or $2.84 if you buy the whole season.  However, this pricing is for HD quality.  HD doesn’t matter that much to us.  Yes, we still have a standard definition set in the living room.  We’re keeping it until it dies.  Even when it does, we’ll likely replace it with a 32″ HDTV, not a huge big screen TV.  The standard definition content that Amazon offers should be good enough.  For the SD version of the episodes, we’d be paying only $1.99 or $1.89 if we bought the whole season.

Most shows are released on DVD after they have their season ends on TV.  For many shows, buying the DVD or Blu-Ray of the show just isn’t worth it over Amazon VOD or waiting for the show to appear on Netflix.  For other shows, buying the DVDs can actually be cheaper.  Take Teenage Mutant Ninja Turtles, for example.  This Nickelodeon show has my boys hooked on turtle power and me constantly reliving my childhood years when I was hooked on the original TMNT cartoon.  There are 26 episodes in each season of TMNT.  On Amazon VOD, this would cost $49.14.  However, the show releases three or four DVDs per season.  The total to buy the DVDs is only around $35.  This means we can save about $14 by getting the DVDs instead of by buying the episodes individually.  Yes, we need to wait longer (in this case, about five months), but for shows that we don’t have a pressing need to see immediately, this is a nice option.

Watching cable TV is a lot like trying to get a small drink out of a fire hose.  You’ll get your small drink – along with a ton of other water that you really didn’t need.  When it comes down to it, there will be shows that we won’t care about after the cable TV cord is cut.  These shows will fade out for us, perhaps replaced by new shows available online and perhaps briefly brought back when we discover DVDs of them in our local library.  When it comes down to it, we have many options for video entertainment.  Cable TV is but one of many choices.  We could watch some purely online shows (like Tabletop from Geek and Sundry on YouTube), we could play some WiiU, or we could play with some fun apps on our tablets/smartphones (e.g. Minecraft).  This doesn’t even get into the non-video entertainment we can engage in such as tabletop gaming, playing with toys (a favorite of JSL who loves thinking up plotlines with his figures), or reading books.  In the end, there is plenty to occupy the time freed up by ditching some cable TV shows.

So what will we save in the end?  This is hard to say as we don’t know exactly how many Amazon VOD shows and DVDs we’ll buy.  My best estimate, though says we’ll save $23 a month after paying for Hulu Plus, Amazon VOD, and DVDs.  (I don’t count Netflix or Amazon Prime as we pay for those already and would have continued with them even had we kept cable.)  Now, this might not seem like much, but at this point it’s more the principle than the money.  We’re sick of paying more and more each month while the cable companies get more powerful.  There’s not much we can do about their ISP monopolies – our only ISP choice is Time Warner Cable and we can’t get rid of Internet – but we can opt to break free of the cable companies as much as possible and cut the cable cord.  I’ll definitely blog about our cable cord cutting experiences in the future – highs and lows.

Have you cut the cable cord?  If so, how did it go?  If not, have you considered it?

NOTE: The “No Cable TV” image above was made by combining HDTV by jgm104 and No-sign by skotan.  Both images are available from OpenClipArt.org.