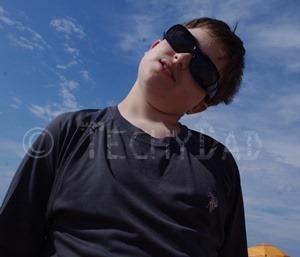 Today, NHL turns twelve years old.  He is officially one year away from being a teenager.  That’s a scary thought as part of me still thinks of him as my little baby.  The time from his birth to now has rushed by in a blur.  I’m sure there was some wibbly wobbly timey wimey stuff going on since it both seems like a lifetime ago and yesterday when he was a little baby.  Part of my brain keeps insisting he’s a baby but the other part is starting to plan for him having his bar mitzvah driving a car, dating, going to college, and other milestones of him growing up.

Still, as much as I like to look forward, I think that birthdays are a great time to look back as well.  We’re constantly and changing.  The people we were a year ago are nothing like the people we are today.  I figured this would be a good time to think back on everything that NHL has accomplished this past year.

First and foremost is middle school.  Going into sixth grade, we were afraid of how NHL would do in middle school.  Given his Asperger’s syndrome and his problems with executive function, we were sure that the transition from class to class would throw him off.  We mentally prepared ourselves for a year-long fight to help prop him up as he crumbled apart.

What we failed to see coming was that NHL, like many on the spectrum, thrives on schedules.  He likes knowing just what is coming and hates when plans consist of "well, we’ll see what happens."  Furthermore, when a schedule is set, changing it causes disruption equivalent to have a 8.0 earthquake hit.  In elementary school, there was one teacher teaching everything (except for a few special classes).  This meant that the teacher could extend one lesson a bit longer if he or she felt like the extra time was needed.  For NHL, though, these willy nilly schedule changes rocked any security he had in the world.

In middle school, though, there was a loud buzzer that would ring to signal the end of class.  It didn’t matter if the math teacher really felt like she needed five more minutes to finish this lesson.  The buzzer sounded which meant this class was over and they had to get to their next one.  The structure of this routine (combined with an amazing sixth grade support team) helped NHL shine as a student.  As for us: for the first time since NHL first started daycare that we really felt like we weren’t fighting major battles.  There were times when we had to go up to bat for NHL, but it felt like we were moving couches and painting rooms, not trying to get four walls and a roof in place.

NHL’s second accomplishment is the nature of his academic achievement.

NHL began to take pride in his grades and loved school.  Granted, I think he has always liked school a lot, but there were times when these "like school a lot" were punctuated by moments when he cried over going back into bad situations.  This year, though, he LOVED school the whole way through.  His love of school translated into a love of learning and he really showed how powerful his brain really is.  He got silver honor roll the first two semesters and, not satisfied with that fantastic performance, made a declaration that he would get gold honor roll the next time around.  He put in the hard work, stayed after school when he needed additional help, and pushed himself.  In the end, he got gold honor roll in the third semester.  They don’t give this award out in the last semester, but he would have gotten it then as well.  To give an example of how much he pushed himself, his science final exam took his class grade down because he "only" got a 97 on the final.  Previously, he had a science class grade of 100.

Another example of NHL pushing himself was when he participated in NYSSMA.  His band teacher wanted him to play the snare drums, but NHL had his eyes set on timpani drums.  I’m not a drum expert by any means, but from what I can gather, timpani are much harder to play – in part because they need to be tuned.  While NHL was waiting to be called in, he talked with a girl from his class.  She mentioned how she was really nervous.  NHL, however, was perfectly calm.  There was no sign whatsoever of any kind of performance anxiety.  He was going in to do something he loved doing and was totally confident in his skills.  (I envy him when he’s like this.)

I was allowed in for the first part of NHL’s performance.  He was asked to tune the first drum and was allowed to use a bell as a reference tone.  Then, he was asked to tune the second drum to a different tone using only the first drum as a reference.  He carefully tuned the instrument.  When he was done, the instructor asked if he was sure that it was right – seemingly giving him a chance to correct a mistake.  He confidently said it was right and then the instructor dropped the "you made an error" façade and agreed with him.  The end result was that he did really well in NYSSMA.  His band teacher thought that timpani would be too difficult for him, but he set his mind to the task and pushed himself until he achieved his goal.

Due to Asperger’s Syndrome, NHL has always lagged behind his peers in social and emotional development.  He may have been 11 years old, but socially and emotionally was about 8.  Needless to say, an "8 year old" in a class amongst 11 year olds – especially one with an intellectual age of about 14 – doesn’t tend to make a lot of friends.  It’s not that NHL didn’t want to make friends, but he genuinely doesn’t know how to or just what constitutes a "friend."  (I have similar issues with this, but that’s a topic for another blog post.)  Still, he learned how to work with other kids and while this might not have turned into a ton of friends, it has laid some important groundwork.  He seems to have a slightly better idea of friendship and can interact better with his peers.

As an example here, I submit the case of the white water rafting trip.  NHL typically doesn’t like being splashed.  He detests water in his eyes and, so, we were very apprehensive when we were told that there would be a white water rafting class trip.  We won’t even go into the fact that he can’t swim.  (See my embarrassing pool lesson post from nearly 6 years ago.)  It didn’t help when a teacher joked with NHL that she was going to squirt him with water during the trip and he took this a) seriously instead of as a joke and b) as an statement of malice from the teacher directed at him.  We decided that it would be best for me to accompany NHL to help defuse any meltdowns before they occurred.

The trip went swimmingly, though.  (Pun intended.)  He took a front seat on the raft to help lead his group and didn’t care that this meant he’d get splashed more.  In fact, he seemed to relish when the water drenched him.  In a calm area, when the students and teachers got to use water squirters and buckets on each other, he relished shooting his peers/teachers, enjoyed helping his fellow raft-mates to shoot peers/teachers (by steering the raft in exactly the right direction), and even was happy when he himself got hit by others.  It was all in good fun and he not only recognized this but was fully participating.  Somehow, I don’t think One-Year-Ago NHL would have done quite as well.  At the end of the trip, he begged me to bring him back – only this time with B and JSL.  (Sadly, we didn’t get to go back this summer.  Maybe next summer, though.)

There is so much more I could go on and on about how NHL has grown.  Though I still want him to remain my little boy for as long as possible, I’m constantly amazed and proud of the wonderful man he’s becoming.

Happy 12th birthday, NHL.  To quote Matt Smith’s doctor as he began to regenerate:  "I tell you what – it’s gonna be a whopper!"