When you’re on a cruise ship with a couple thousand other people, personal hygiene is very important. All it takes is one “doesn’t wash hands after going to the bathroom” individual to spread sickness to half the ship.

To help prevent that, the Norwegian Gem had hand sanitizer stations everywhere. Every public space you entered, especially restaurants, had them.

When you entered the buffet restaurant, though, there was an additional protection. In the buffet, dirty hands touching food serving implements could spread disease quicker than anywhere else. This meant that they upped the protections by positioning crew members at every entrance with bottles of hands sanitizer spray. As you entered, you would be sprayed with an encouraging jingle of “washy washy, happy happy, smiley smiley.”

Unfortunately, hearing that every day for a week got old. We understood the importance but the jingle turned into a joke and an annoyance. Still, I’d rather have been annoyed than sick so even though we hated the jingle, I’ll still thank Norwegian Cruise Lines for it.

And, to remember the jingle (and perpetually annoy JSL with it), I actually videoed one of the crew members saying it. 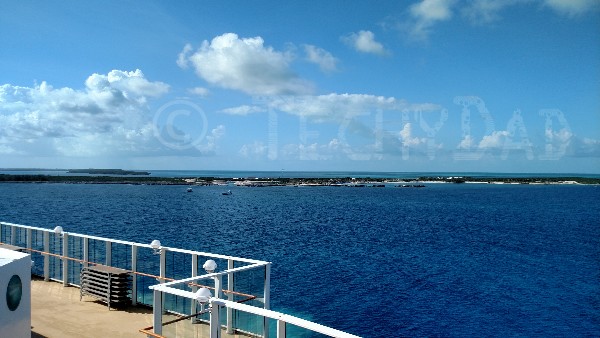 Today was beach day on our cruise. As we approached Great Stirrup Cay, we dropped the boys off at Splash Academy – Norwegian Cruise Line’s kids camp – to have some fun while B and I had some couples’ time away from the kids.

While walking around, we saw the island we were heading to later.

We were amazed at how blue the water was. 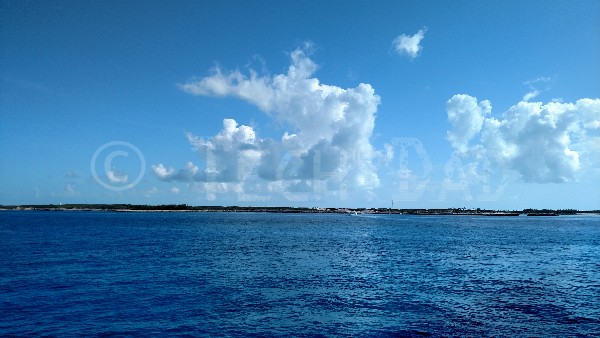 Soon, it was time to get our tender tickets. You see, the ship is just too big to dock at the Cay. So you need to board smaller vessels which take you to and from the Cay.

Unfortunately, everyone couldn’t go on the same boat so they gave it numbered tickets.  We were given number 11, but this still meant needing to wait. At last, our time came and we got to head to the Cay. 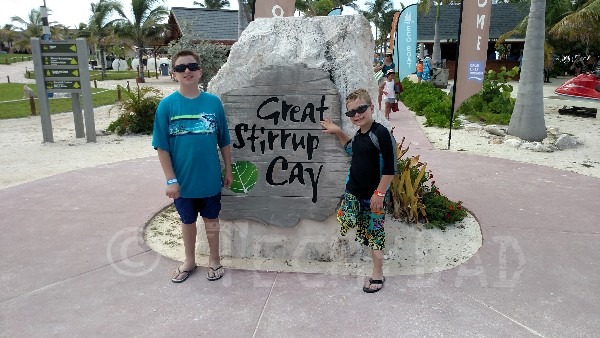 At the Cay, there was food, music, games, shipping, and, of course, the beach. 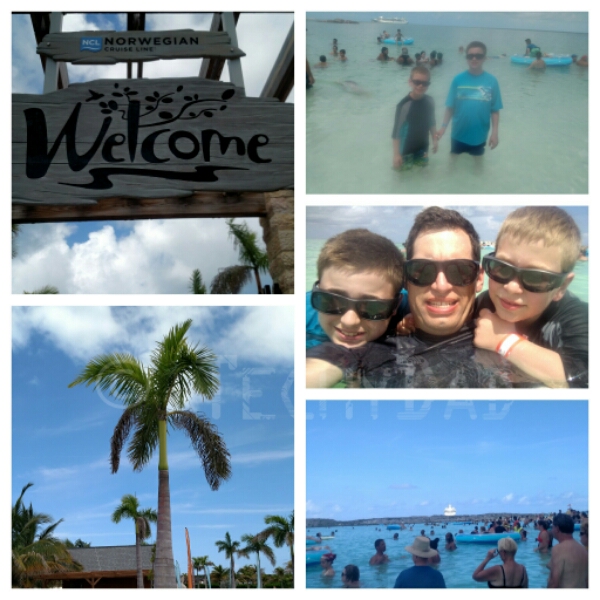 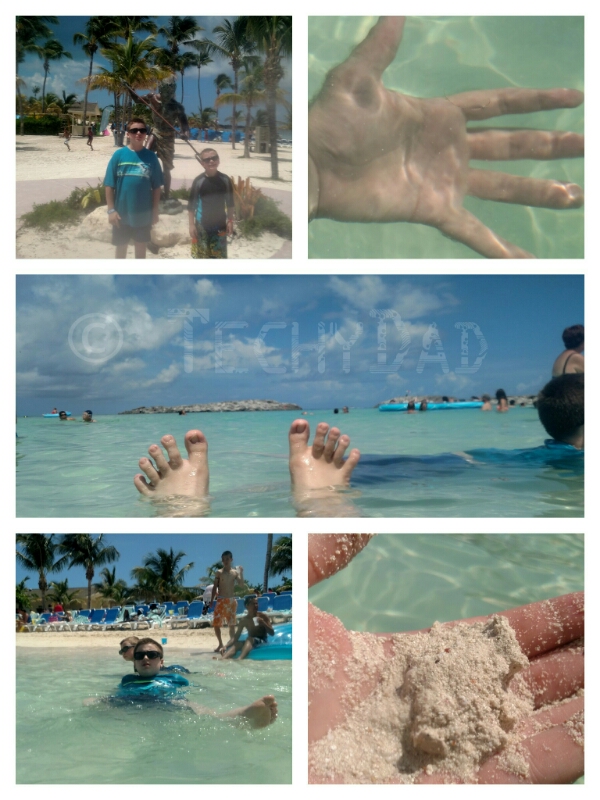 All too soon, it was time to head back to the ship. As much as I like the ship, part of me wished I could just remain on the beach – having lots of fun without any cares at all – for the rest of my life.

Our day didn’t end there, though. More about our cruise another day.. 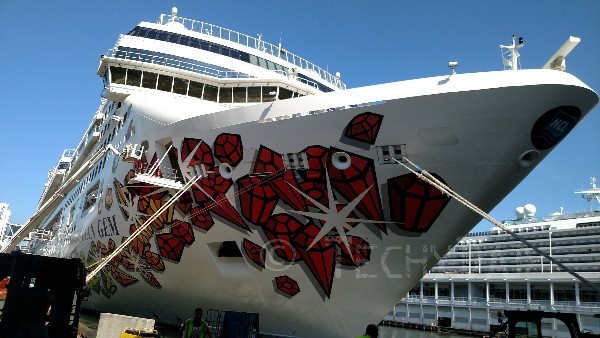 At the moment, we’re on the Norwegian Gem for a seven day cruise to Cape Canaveral and the Bahamas. Internet access is limited, but I’m taking a lot of photos to share later. For now, though, here’s are a few shots from our first two days.

First, we arrived at our ship and we’re amazed by how big it was. It’s one thing to HEAR how big it is, but it’s another thing to see it.

We got on board, dropped off our bags at our room and went for a walk around the ship. We also decided to start using our Ultimate Beverage Plan: 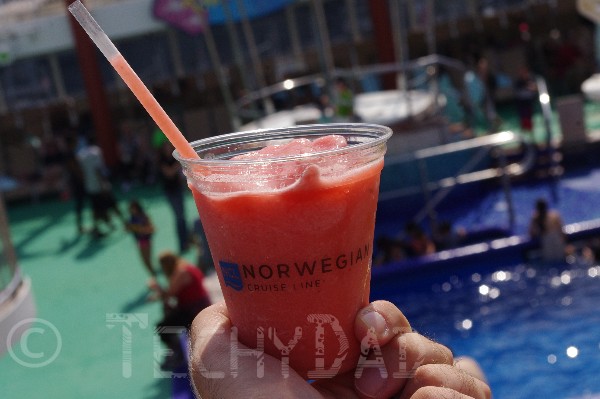 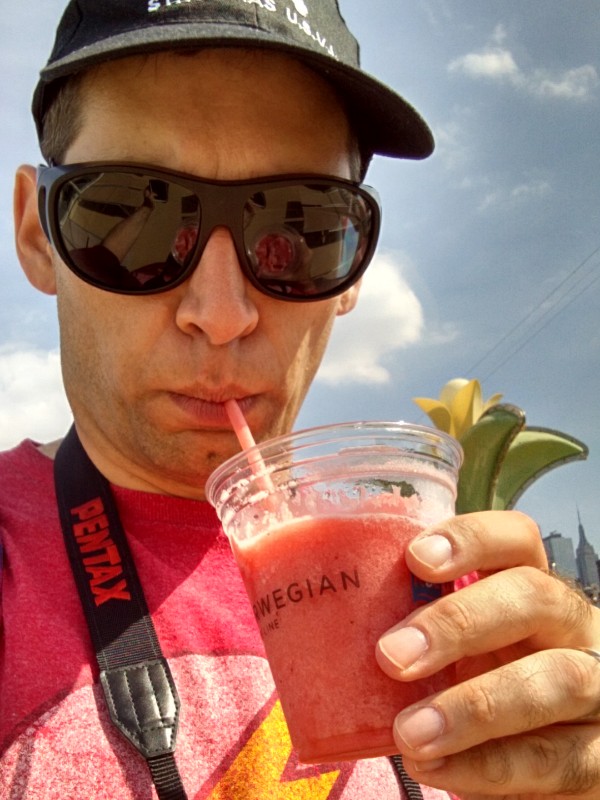 The boys said hello and goodbye to Lady Liberty. 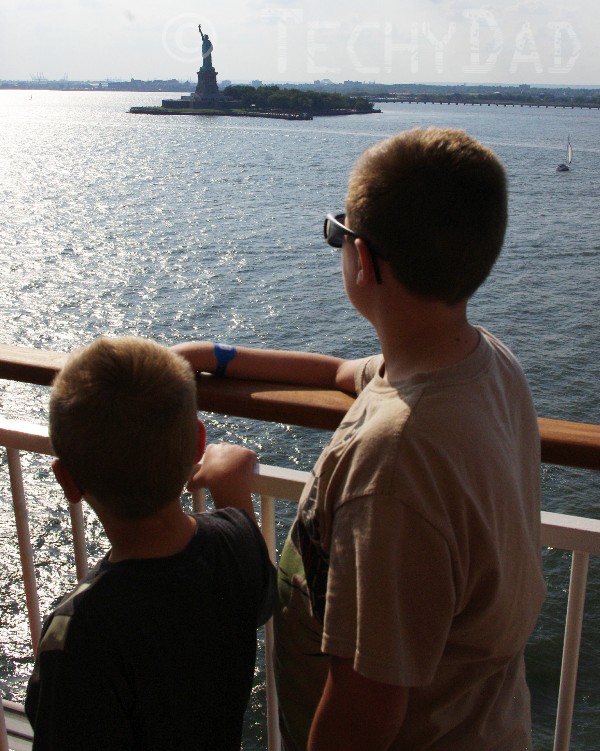 We had dinner in a restaurant at the back of the ship. My fresh mozzarella and tomato was phenomenal. (It looked so good that I tore into it before taking a photo.) The eggplant was amazing and the chocolate volcano was incredible. The view out the rear window was great too. (Mental Note: Photoshop someone water skiing behind the boat.) 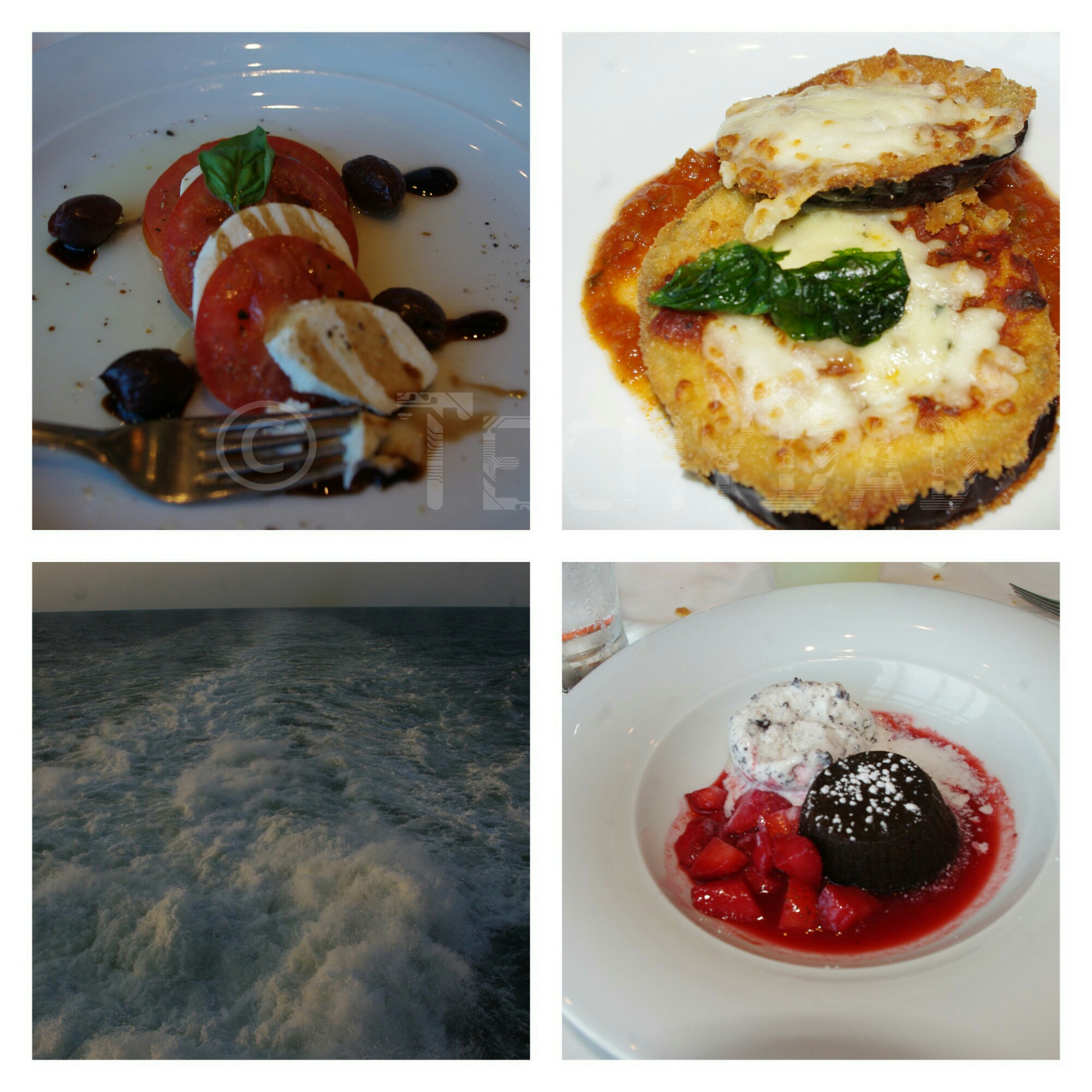 Today, we went to the pool and the boys and I had a blast on the water slide and splashing around. 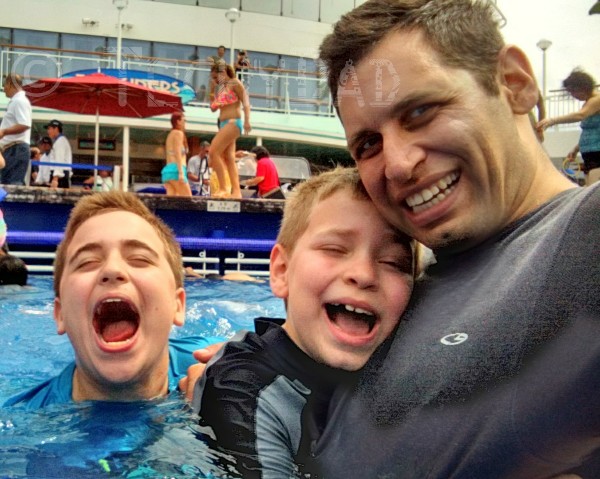 More photos will definitely be coming and it looks like plenty of great times are ahead. 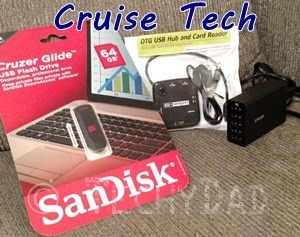 In part to celebrate my fortieth birthday – and because we haven’t had a family vacation in years, we’re going on a cruise to the Bahamas.  To most people, this would mean finding the right swimsuit or packing extra sunscreen.  To me, it means finding the right technology.

I’m a bit of a photography nut.  And when I say "a bit", I mean I tend to take one photograph every ten seconds while on vacation.  I’ll have my DSLR with me to help take photos, but I’ll also be taking photos with my smartphone.  There’s only one problem:  My phone might wind up running low on storage space.  I’d hate to find myself unable to take photos with days to go.  Alternatively, I might take a spectacular photo with my DSLR and want to share it on social media from the boat.  Thanks to Norwegian Cruise Lines, we’re getting 100 minutes of free Internet service.  We’ll use this – sparingly – to queue up some social media photos every night.

But back to the question at hand:  How do I upload/download photos to or from my phone?  I could pack my laptop, but that would be one more thing to keep track of.  Instead, I did a little research and found out that my phone comes equipped with a technology called USB To Go.  What this means is that – with a special cable and app – I can connect a USB device to my phone. 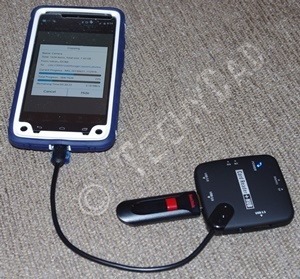 This adapter cable plugs into the phones’ microUSB plug.  From there, there are 3 USB slots where devices such as a thumb drive or an external hard drive can be plugged in.  There are also slots for memory cards such as SD cards (like my DSLR camera uses).  When I plug in a memory card or thumb drive, I can launch ES File Explorer File Manager (a free app from the Google Play store) to view the files stored there.  I can copy files from the phone to the thumb drive/memory card or vice versa.  This means that I can use a 64GB thumb drive as a backup medium.  Depending on how many photos we take, I could even back up the DSLR photos to the thumb drive using this method.

The other piece of technology that I’m going to bring will help me charge my devices.  I’ve heard that cruise ships can be light on the power outlets.  I guess this is to be expected as the cabins themselves aren’t very spacious.  However, given that we have multiple devices (at least two phones and perhaps the boys’ tablets as well), how can we charge all of them.  We could bring a surge protector, but I also heard that these can be troublesome on the ship which is understandable – if everyone plugged in and filled up a surge protector the ship’s electrical systems could be strained.  My second piece of technology is a USB charging hub. 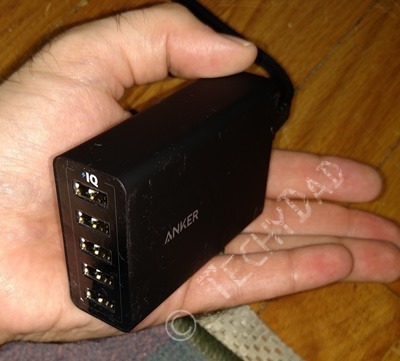 USB devices don’t need the full power of a standard electrical outlets to charge devices.  This hub will plug into one outlet and will give me five USB charging ports to use.  Granted, we’ll likely wind up using four at most for nightly phone/tablet charges, but still each port will only use 2.4 amps of power per port with a maximum of 8 amps total.  A standard electrical outlet uses 15 to 20 amps so, even if this were fully loaded, it would use less power than a hair dryer (or some other normal plugged in electrical device).  Furthermore, this is very small.  I was expecting something much larger and bulkier, but was pleasantly surprised to find that the main unit fits comfortably in my hand.

The last thing that I’m bringing isn’t tech, but it is for the cruise.  I’m on the hunt for a good cruise book.  I don’t want just any book, though.  I want something geeky to pour into.  Given that we’re going to be pretty disconnected from social media and totally disconnected from any geeky online discussions, I need something geeky to indulge in while cruising.  At first, I considered getting The Bloggess’ new book Furiously Happy: A Funny Book About Horrible Things.  Unfortunately, it’s release date is September 22nd.  Unless Jenny sends me an advance copy (something that I consider highly unlikely) or unless a blue box comes bearing a gift from the future, I don’t think this is an option.  Quick side note: I read her first book – Let’s Pretend This Never Happened – twice and loved it.  I annoyed B a few times by laughing out loud.  (Anyone who knows me knows that I can have a very loud laugh!)  I keep meaning to do a book review of it here and keep getting distracted.  Squirrel!

What tech items or geek books would you take on a cruise?

NOTE: The links to Amazon above include affiliate tags.