Yesterday, I chronicled our journey through the body.  Along the way, I highlighted some pretty gross photographs that I took.  Becoming a parent has changed my life in many ones.  One of the biggest surprises was how my idea of what constitutes “gross” has shifted.

Standing there, with a cup of urine in my hands, I felt wave after wave of nausea hit me.  The smell, sight and just plain idea of holding someone else’s pee make my stomach (and a few other internal organs) turn.  Luckily, I didn’t succumb to the nausea.  Even better, the test came out positive.

Fast forward a few years.  Did the idea of someone else’s pee in my hands disgust me?  Not at all.  In fact, I was quite comfortable relaying stories of the Day of the Seven Diaper Diaper Change (where NHL filled up diaper after diaper as quickly as we could change them) or of the Great Projective Pooping Incident (where his poop shot out 4 feet and then covered a span of rug stretching another 4 feet, timed right when we needed to head out to see a house).  I could even discuss these subjects in the middle of lunch (and be amused at the reactions of the non-parents within earshot).

My Aloha Friday question for today is: Has being a parent changed your definition of what “gross” is?

A (Semi-Gross) Journey Through The Body

Last year, we went to the Colonie Center mall to attend a Journey Through The Body program.  The boys had fun, so we decided to try it again this year.  We made our way over and started to fight the crowds to see the exhibits.

Each of us seemed to have different goals.  NHL was focused on what “characters” he could see.  As they did last year, volunteers dressed up as fruit and animals to highlight healthy eating habits.  NHL acted as though meeting a girl dressed as grapes was as fun as meeting Beast in Disney World.  (I blame it on a post-Disney crash where he’s looking for the Disney high again.  Disney addiction can lead you to do crazy things… Luckily, there’s no cure!) 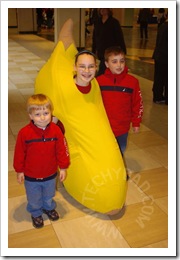 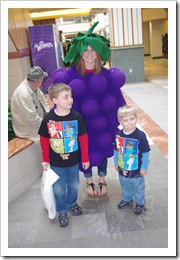 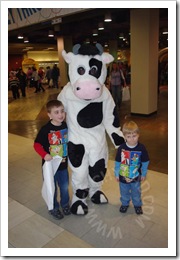 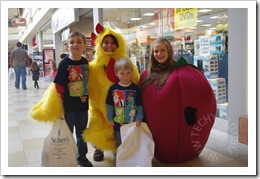 For the sake of brevity, I’m including all the characters here to get them out of the way.  I won’t reference them again, but rest assured that NHL was constantly on the look for new characters to meet.  Several times he would shout “I think I saw the apple!  Over there!  Is that the apple?  No?  Ok.”  or “There goes the chicken!  We need to go over there to see the chicken!  We’re missing the chicken!!!!”

B, still not fully recovered from stand-on-line-at-Disney-World-itis, was clearly not having fun.  So I decided to give her some time off.  She headed to the Christmas Tree shop for some solo shopping time while I corralled the boys.

JSL, was taking it all in.  He liked the free stuff and the characters, but he also liked the interactive nature of some things.  Most of all, though, he liked the slide.  He repeated over and over how he wanted to go to the slide.  I had to reassure him that he would get to go on it eventually.

Me?  I was in it for the educational nature of it all.  That and photo opportunities.  Especially photo opportunities of the gross out kind.  Beware: Gross photos will be following.  Those with sensitive stomachs might want to close their eyes.  (Or, at least, not click on the photos to see larger versions.)

We first went over to the big mouth.  The kids remembered this well from last year.  They waited for a family to finish their photos and then went to work brushing the giant teeth and tongue. 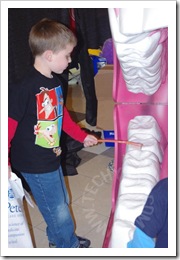 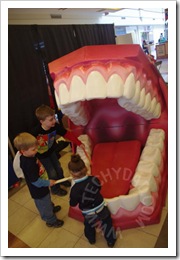 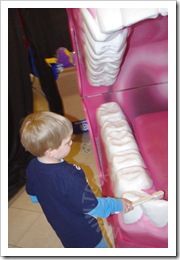 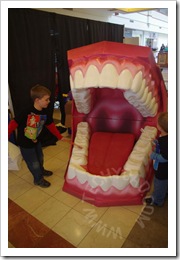 After this, it was time for a journey into the ear.  We were shown how the hairs in your ears keep germs out.  If that’s the case for the nose too, no wonder I rarely get sick! Finally, a good thing to say about my ear and nose hair.  (Hey, I said this post might be gross!)  We also got to see the tiny bones in your ear and how the ear turns sound into electrical impulses.  In this giant-sized example, we were told to clap and sound-activated lights blinked in response. 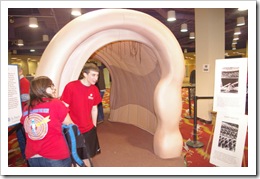 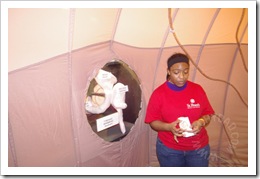 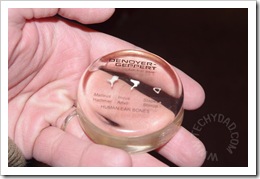 After the ear, we saw some displays on the human brain.  Here, NHL and JSL worked on a brain puzzle and got to feel a realistic (not not real) brain. 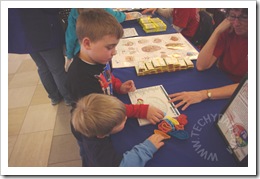 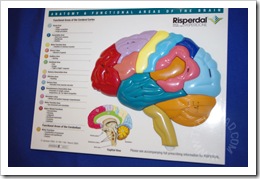 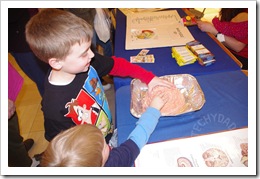 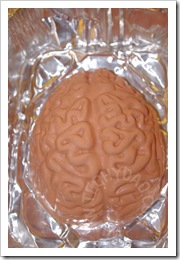 Moving from the brain, we worked our way to the lungs.  Here, NHL and JSL got to see a healthy lung and a lung that was affected by cigarette smoke.  (Gross photos ahead!) 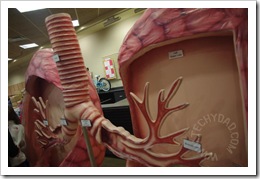 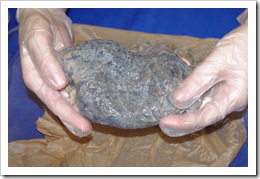 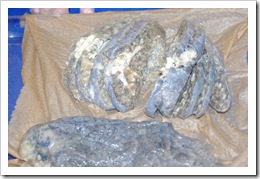 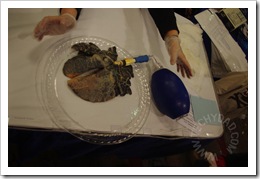 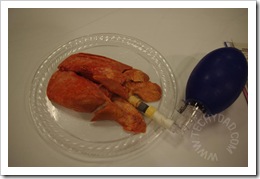 After a few more exhibits, the boys got to the section they were waiting for: The bone slide.  Both NHL and JSL scaled the slide and rocketed down a few times.  I’m not sure of the educational value here, but it sure was fun.  To misquote Mary Poppins: A spoonful of fun helps the educational material go down. 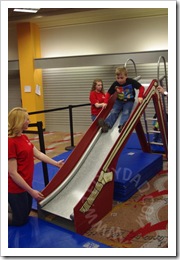 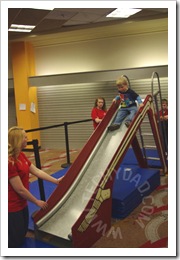 We ended our journey with the heart.  Well, that’s not quite true.  We waited on line to see the heart, but when NHL saw the cow hearts sitting in ice water (tinted red, no doubt from residual blood leaking into the water), he declared he didn’t want to touch them.  No problem.  Then he saw that they had been cut open so people could see the insides.  That was it.  He had reached his gross-out point (he’s squeamish about blood in general) and wanted to get away.  I took some quick photos before we left. 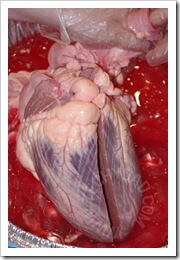 Just so I’m not leaving you with that image, here’s a shot of NHL and JSL as we stopped by the tooth exhibit again on the way out.  They decided to brush some life-sized teeth this time. 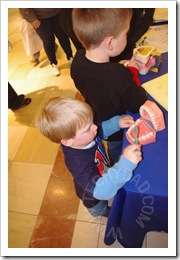 All in all, it was a fun experience.  The boys had a blast and learned a bit, B got some time to herself (a sanity essential) and I got to take some really gross photos.  Wins all around!