I’m a big believer in giving bad news before good news. Whenever anyone tells me "I’ve got good news and bad news", I always ask to hear the bad news first. My reasoning is that you should get the bad news out of the way so that you can better focus on the good news. With that in mind, I’m going to tell a few "bad news" stories about our Disney World trip. Once these are out of the way, I’ll better be able to focus on all of the fun times we had. Please don’t take the following stories to indicate that our trip was horrible. These are just the four "bad news" stories that I need to get out of the way so I can tell the "good news" stories later on.

Remember my Gorilla of my Nightmares post? Of course, you do. (If not, go back and read it. I’ll wait.)

Right after the gorillas, we were walking to the next exhibit. JSL decided to run and *klunk*. He fell flat on his face. He actually broke his fall with his hands, but his forehead hit the cement. This meant that we needed to locate, and head off to: 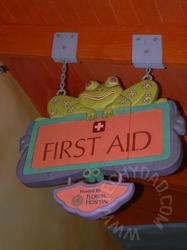 Yes, that’s Disney World Animal Kingdom’s First Aid station. Just the attraction you hope to skip during your visit. Should you need to visit First Aid, though, rest assured that the staff we encountered were just as helpful as any other Disney employee. (Which is to say very helpful.) He quickly bundled together an ice pack for JSL to use. JSL insisted on using the ice pack on his hand until we convinced him to use that hand to hold it to his forehead. In the end, he only had a slight bruise on his forehead. Not so bad, but still not ideal during a vacation.

Yes, JSL fell again. This time, however, B was at the Social Media Moms conference. I was on my own. Check that, I was with @cyrisflare and his son, TJ. We were in one of the Polynesian’s snack shops trying to decide what to buy the boys (and ourselves) for breakfast. I had to move the stroller so I told JSL to get in. He climbed in and sat down. As he placed his rear down, I started backing up.

At this point, JSL decided that getting out of the stroller was a great idea. He twirled his body around and slid out. And I mean slid. His whole body slid down the "leg rest" area of the stroller and onto the floor. His head went "klonk", he started screaming, and I suddenly realized that we had a First Aid Part 2 on our hands.

A quick examination of him showed a large lump on his forehead – the same exact spot he his last time. It was black and blue and getting bigger. Other than being upset over falling, though, JSL seemed fine. He wasn’t losing consciousness or acting any differently. I asked a cast member about First Aid and he said that the Polynesian doesn’t have one but that perhaps I could get some ice from Kona Cafe.

We went over to Kona and let them know what happened. Someone went in the back and returned with some ice in a towel and a manager. The manager informed us that we could go to an urgent care facility nearby or to a nearby hospital. By this point, JSL was calmed down and acting normally. I decided to go with Option #3: Go on to Epcot, like we planned, but hit the First Aid station first.

I travelled with @cyrisflare to Epcot (as per our original plan) and then split up (after first seeing Rafiki and Mr. Penguin – a tale I’ll tell in a later posting) and found the First Aid station. There, I got a proper ice pack and the advice to just observe his behavior and wake him up every few hours when he slept.

JSL was refusing to keep the ice pack on so I (being the great parent I am) decided to resort to bribery. I bought him a Crush Turtle plush that I noticed he had his eye on and in return he (mostly) kept the ice pack on. Here is is sleeping with Crush: 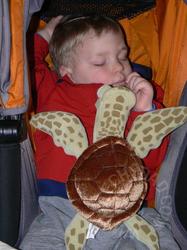 As of this writing (5 days after the fall), his bump has not gone away and it’s looking more black and blue. He did see a doctor Monday, however, who said it looks normal for a bump in that spot. I was beginning to question my "no hospital/urgent care" decision, but if the doctor thinks he’ll be fine, I guess he’ll be fine.

Again, I’ve got to compliment Disney. They helped me out during a horrible situation. Hopefully, they don’t mind me saying that I hope no one has to use those services. They’re first-rate services, but injuries should not be on your mind during your Disney trip!

Apart from @cyrisflare (whom I’ve met before), there were a whole bunch of "DisneySMDads" that I had hoped to meet during our trip. Alas, by Thursday night I hadn’t met any of them. As we were walking back to the monorail, B pushing the stroller with a sleeping NHL and a still-awake JSL, I heard someone behind me say "I still need to meet TechyDad."

I turned around and said "I’m TechyDad!" He introduced himself as "DaddyDigest." However, just as I was about to strike up a conversation with him, I heard a howl. Apparently, the crowd had pushed B towards the metal bars leading to the monorail station and JSL took this opportunity to stick out his arm. Before B could holler "put your arm back in", she heard a crunch and JSL screamed.

Needless to say, socialization time was over and "figure out if JSL is injured" time started. Luckily, JSL wasn’t hurt bad. He had some minor swelling that went down quickly. Also luckily, I was able to meet up with DaddyDigest again the next night and speak with him for a bit. (I really do wish I met more of the dads during the trip, though. We need a DisneySMDads, but that’s a whole other blog post.)

While B was in a conference on Friday, NHL, JSL and I spent time in the Magic Kingdom with @cyrisflare and TJ. Unfortunately, it rained. At first, the rain was light so it wasn’t too bad. After lunch, however, the rain started coming down really hard. I took NHL & JSL back to the hotel room (to protests by NHL who wanted to go to another park) in an attempt to dry off our clothes.

During this time, B and I texted each other about plans for the event that evening. There was to be a Toy Story Mania Dance Party in Hollywood Studios. I misunderstood her texts to mean that we should meet at Hollywood Studios by 4:30. Instead, she meant for us to meet in the room. So when she arrived back in the room, I wasn’t there. Needless to say, she was upset with me. On my part, I was cold and wet (hair dryers to not dry soaking wet clothes) and my nerves were fried from the kids acting up. I was not in a mood to be yelled at for what I thought to be a simple miscommunication.

We eventually met up and had a good time at the party. That night, however, there was a Spousal FAIL and I’m ashamed to admit that it was fully my fault. B had taken CutestKidEver‘s flower from the conference back to our room for safe keeping and was headed out to return it to her. I had just taken a nice, long warm shower to rid myself of the chill and was ready for bed. As she left, B told me that she didn’t have her room key. Now here comes the Spousal FAIL: I sat down in bed and (feeling cold) put my legs under the blankets. Could I not see what would happen? Tired TechyDad + Nice Warm Blankets?

Yes, I woke up to the phone ringing. After groggily looking for B, I answered the phone and heard B yelling at me. I opened the door and she stormed in (rightfully) angry with me. Apparently, at one point, she had banged on the door so loud that our neighbors woke up – but I didn’t. I tried to apologize, but really there was nothing I could say that would make it better. I can only promise B that it won’t happen again. It was a huge Spousal FAIL on my part and was a horrible way to end an evening.

Like I said earlier, all of these "Bad News" stories shouldn’t be taken to indicate that our trip was awful. Far from it. It was a wonderful trip and we’d go again in a heartbeat. I’m just a big fan of getting "Bad News" out of the way as quickly as possible so we can focus on the positive. Over the next few days, I hope to share some of our happy tales from Disney with you.