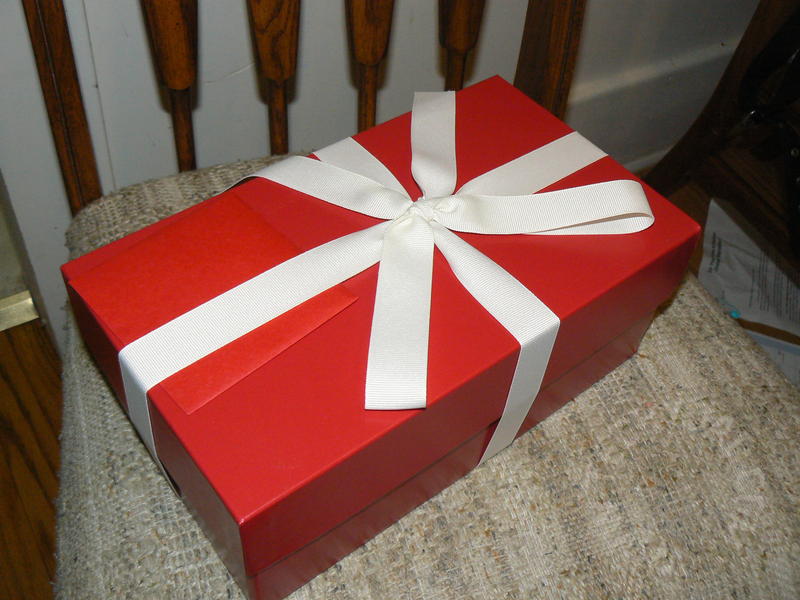 As you might have guessed from my frequent Cooking With TechyDad posts, I love to cook. I’m also a fan of Alton Brown (the God of Cooking Geeks) and have often drooled at some of the gadgets he employs. One of these is a laser thermometer. If he wants to see how hot something is, he doesn’t use no stinkin’ stick thermometer. He whips out his laser and shines it on the object. In a split second, a digital display tells him just how hot it is.

When I heard that RedEnvelope was offering Dad Bloggers (via Dad-Blogs.com) a chance to review some items from their Father’s Day Gifts collection, I was intrigued. When I saw the infrared laser BBQ thermometer on the list, I knew I had to review it.

Now, let me come right out and clear two things up. First of all, I’m not sure whether or not this is the same brand that Alton Brown uses so please don’t take my previous mention of his name as implication of an endorsement. Secondly, I don’t have a BBQ. So why review a BBQ thermometer? Simple, despite the name, it can take the temperature of anything from -58°F to 1,022°F. This can include food (exterior only), oven, bathwater, room…. anything.

The package arrived and I excitedly opened it. Inside was a nice red box tied up with a bow and a card in a (what else) red envelope. Wonderful presentation. I felt like I was getting a special present (and I guess I was). Opening it up, even the tissue paper was neatly wrapped up with a RedEnvelope sticker holding it together. I was highly impressed and I hadn’t even seen the thermometer’s box yet! 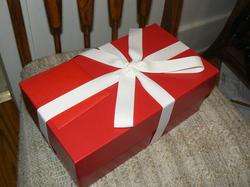 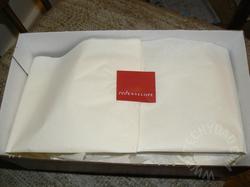 Once I got to the box, I paused just long enough to take a photo of it and then ripped it open. 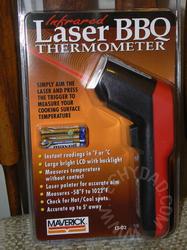 After popping in the included 2 AAA batteries, the thermometer was ready to go. I didn’t even need to read the instructions. It’s literally point and click. Point it at an object and click the trigger. A red dot will appear on the object (the only visible sign of the otherwise invisible laser) and the temperature will appear on the display. Since temperatures can vary, it will even display the maximum temperature read during a session. Leaving it alone for a few seconds will shut down the unit.

I tested it on my oven while preheating it to 400°F. As you can see, my first reading was close (354) but the second was at temperature. The photo shows 392 but you’ll notice the maximum says 406. The thermometer was instant, but my camera wasn’t. Taking the photo took a second or two during which the oven cooled to under 400. 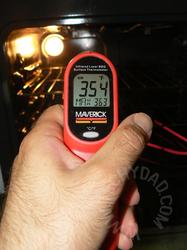 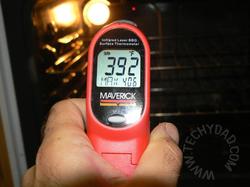 I also took the temperature of some burgers I was cooking (even though I realized that this doesn’t measure the internal temperature of the meat) and NHL’s bathwater. With the latter, I was able to tell that the tub was too hot (around 102) and was able to cool it down before NHL got in. (Yes, I would have been able to tell that with my hand, but this is a much cooler method.) 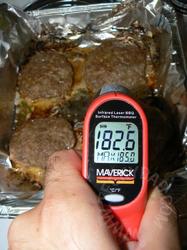 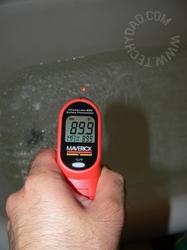 Overall, I’m really happy with this and think I’ll use it often while cooking to quickly determine temperatures.

RedEnvelope has also generously provided a coupon code for TechyDad.com readers to use to get 10% off on their orders: 10offred

Disclaimer: Red Envelope sent me the Infrared Laser BBQ Thermometer to review. The opinions expressed in this post, however, are mine.