Have you ever read CakeWrecks?  If not, you definitely should.  People from all over send Jen and John photos of badly designed/executed cakes done by professionals.  These might be funny on their own, but Jen and John don’t simply post the photos.  They include hilarious commentary as well.  The end result is a website that can often result in you laughing out loud thus alerting your co-workers to the fact that the website you’re on is not work related.  (Not that I’d ever do that, mind you!)

Anyway, as we were planning to go to Disney World for DisneySMMoms, I noticed a Cake Wrecks post that mentioned that Jen and John reside in Orlando.  I asked if they’d be interested in a meet-up and they said yes!

While walking through Disney World, I was so looking forward to meeting the folks behind Cake Wrecks that I began seeing Steampunk influences in various locations in Disney World.  Ok, this might require some explanation.

Many of you are probably saying “What the @%^# is Steampunk?”  First of all, you should all be ashamed of yourselves for using that kind of language.  That aside, Steampunk envisions a world in which steam powers everything.  (For a detailed analysis of Steampunk, consult Wikipedia.)  From many readings of Jen’s other blog Epbot, I know that they like Steampunk.  So my brain seemed to home in on Steampunk elements.

One thing about Steampunk is that gears and bronze coloring are big. 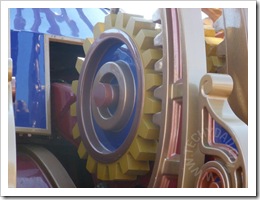 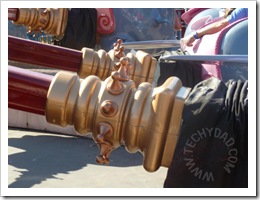 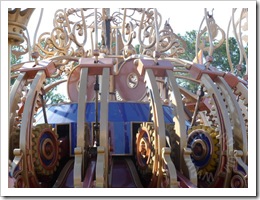 Those shots are from the Dumbo ride.  Yes, the ride known for letting kids of all ages fly atop an elephant is secretly a Steampunk ride! 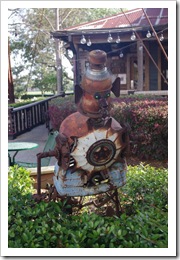 This robot can be found outside of House of Blues in Downtown Disney right near where La Nouba is located.  I’m not positive that Steampunk includes robots, but if it did, I think this is what one might look like.

Of course, my imagination being what it is, I couldn’t help but expand on Steampunk.  Introducing Junglepunk! 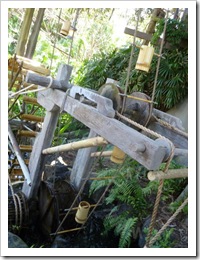 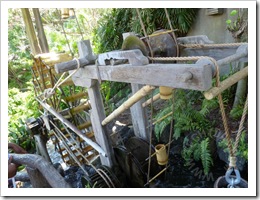 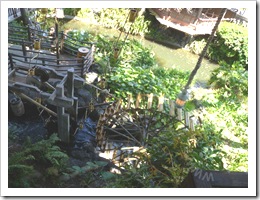 These are from the Swiss Family Robinson Treehouse.  The river turns the big wheel which pulls ropes to move a series of buckets.  The buckets collect water, get lifted high up and then spill their contents onto a series of drainage gutters which lead to a storage vessel in the kitchen.  I’d bet you could design a whole series of “technology based on running water”  I believe Futurama has already provided one: 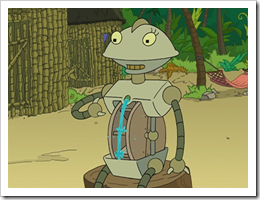 Getting back to the Swiss Family Treehouse (which my boys loved so much that we walked through it twice back-to-back and then they complained when we didn’t go through a third time), I loved the look of this piano. 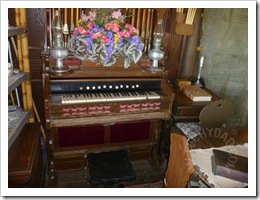 Getting back to the “*punk” genre expansions, though, how about “Toypunk”? 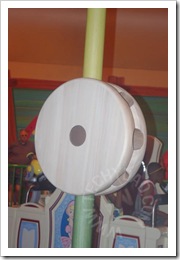 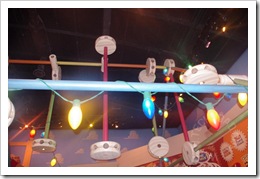 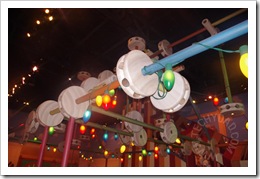 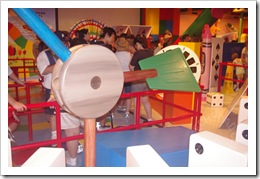 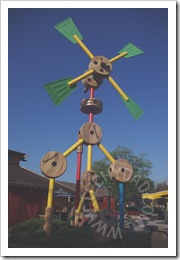 I’m thinking that the Lincoln Logs could be miniaturized and used to replace gears in a Steampunk-esque design.  Steampunk meets Toy Story!

Of course, this post wouldn’t be complete without mentioning the Cake Wrecks-TechyDad/TheAngelForever meet up.  We had agreed to meet in Epcot’s France area.  Twice prior to this, the boys and I (and B on one of the occasions) ate at Patisserie.  Both times, the boys had Cheese Tartine – French bread topped with a touch of sauce and some cheese.  No, it’s not pizza.  That would be found in Italy and this was France!  Both times I had the vegetable quiche.  Both times, I eyed the pastries.  Please excuse the drool as I think of them again.

When we met, we got a seat and then John, the boys and I went to procure some snacks.  JSL wanted chocolate cake, NHL saw John getting a strawberry tart and wanted one.  Me?  I had my eyes on the Napoleon.  (There’s that pesky drool again.) 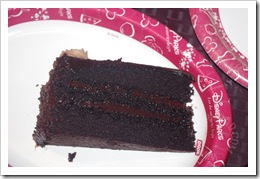 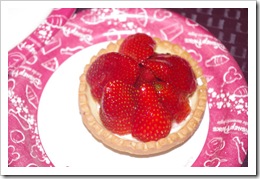 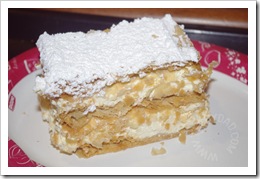 As good as it looked, it tasted even better.  As we ate, we talked about various subjects both online-related and offline-related.  A good time was had by all.  Even when JSL – with perfect kid-timing declared he needed to use the restroom and I had to walk all the way from France to Morocco to find one for him.  The lengths dads will go for their kids and I didn’t even get any frequent flier miles!

Pretty soon the snacks were consumed and it was time to head out.  We said goodbye and went out separate ways.  Here’s hoping we can meet again the next time we go to Disney or if they happen to be in the Upstate NY area!