Today, over on TheAngelForever.com, B is recounting the story of her mom field trip with Christina from CutestKidEver to see Rene Syler (aka Good Enough Mother).  But what of the flip side?  What did the boys and I do while B went on her road trip?  Well, the boys and I had our own fun times.

As you may remember, I was undecided on whether or not I should go to Free Comic Day.  After B left, I made my decision: We were going.  I armed the kids with their Green Lantern rings from our Green Lantern party, got them into the car and headed over to Zombie Planet.

I had heard that the 501st, a group of Star Wars fans who dress up like Stormtroopers, would be there.  NHL was excited to see “costumes.”  Ever since Disney, he’s gone costume-crazy.  He must meet (and get his photo with) any costumed character who is anywhere near him.  He was not disappointed.

We got out of the car and there, in front of the store, was a single Stormtrooper.  He was joined by a Tusken Raider. 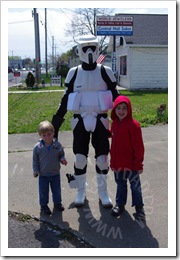 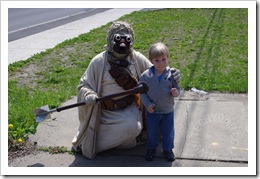 The Tusken Raider would occasionally make a growling sound (like the one that the movie Tusken Raider made as he stood over Luke Skywalker).  This scared NHL off from getting his photo taken with the Tusken Raider.  So we went indoors and proceeded upstairs to the free comics section. 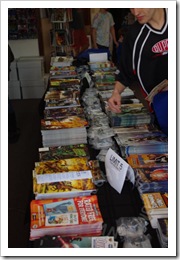 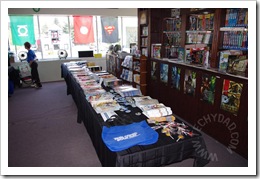 Unlike last year, when it was “take as many as you like”, there was a 5 comic per person limit.  I had gone online the previous days to Free Comic Book Day’s website to see which comics would be available.  This meant that I knew just which comics were the best for my boys and which should be skipped.  The only complaints from the boys came when NHL looked out the window and spied Spider-Man.  He insisted that we *HAD* to go outside right now to meet the web slinger. 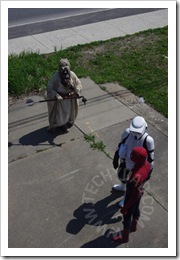 I explained to NHL that we needed to check out (even we had nothing that we were being charged for).  Besides, I had brought some Phineas and Ferb action figures that needed peg stands.  I hoped that the comic shop would be able to help.  (Sadly, they didn’t have what I needed.)

Finally, we left the comic shop and NHL immediately approached Spider-Man for a photo. 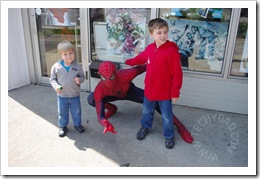 Then, I made a Geeky Daddy decision.  NHL was wearing a Green Lantern ring.  Green Lanterns Hal Jordon was supposedly “born without fear.”  So I couldn’t very well let him leave afraid of the Tusken Raider, could I?  I’d have been deducted 30 Geek Points!

I spoke with him about it and he finally agreed to get his photo taken. 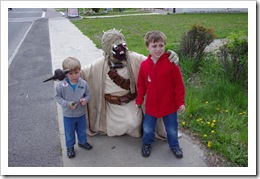 After that, we headed home for lunch and some comic book reading. 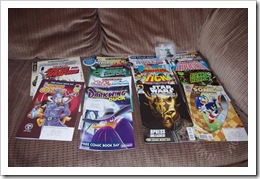 Once the boys were fed, I decided that it was too nice of a day to be couped up indoors.  So we grabbed some of our colossal cannons and headed out to play. 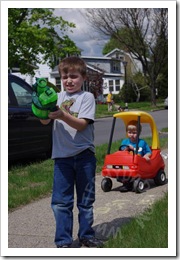 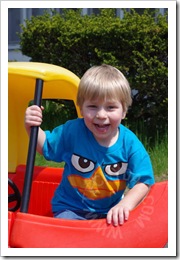 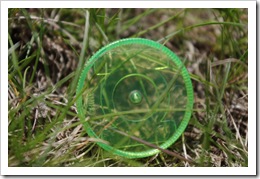 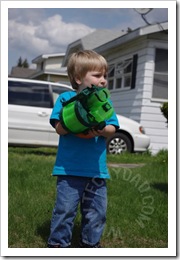 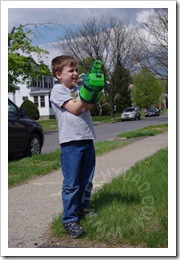 Eventually, NHL had a bright idea.  His great-grandmother had given them some butterfly nets, but NHL thought they’d make great colossal cannon disc catching nets.  And they did! 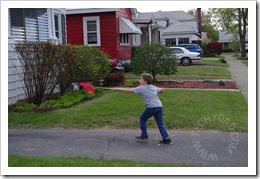 Our next door neighbor’s daughter, N, also came over and played with the boys for quite awhile.  Eventually, they tired of chasing after green discs and wanted to play with bubbles.  Cue the Winnie the Pooh bubble blower! 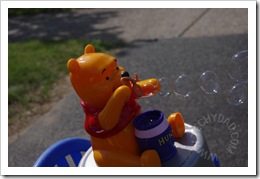 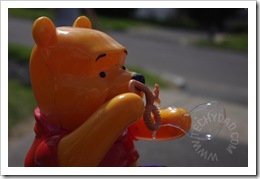 They also wanted to play with chalk and I eventually relented. 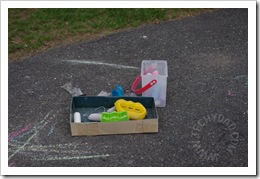 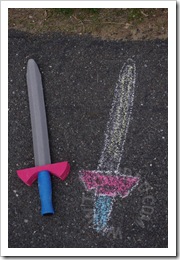 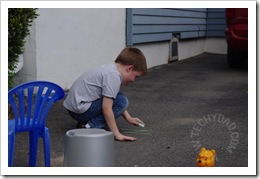 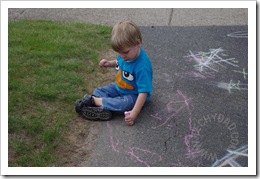 I noticed the skies were getting dark and warned the boys that we might have to go inside soon.  Besides, B’s return time was getting closer and closer. 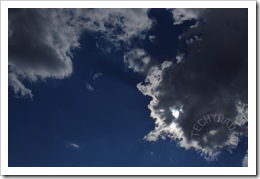 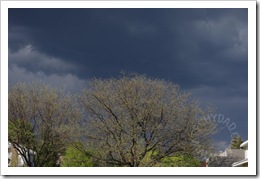 As B pulled up, I hurredly gathered the chalk and got the boys (and N) off our driveway.  The boys said goodbye to N and hello to B.  Then, as we walked in, the heavens opened up.  Perfect timing!

The boys and I had a fun day together and B had a nice Mommy Road Trip.  I’d call that a win all around!