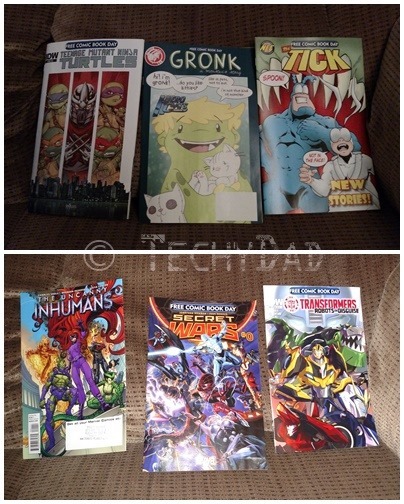 On Saturday, the boys and I went to a comic book store for Free Comic Book Day.  Besides free comics, a big draw for my boys I seeing superheroes or other "geeky celebrities."  One year, the boys got their photo with Spider-Man, a Tusken Raider (from Star Wars), and a Stormtrooper.  Another year, they met the infamous Doctor Doom.  Last year, my boys got to meet Black Widow and the Joker.  A couple of days before Free Comic Book Day, I had read on the shop’s web page that Harley Quinn and Poison Ivy were going to be there.  Needless to say, my boys were really excited.

We lined up waiting outside of Zombie Planet in Albany, NY.  It was a beautiful day and though there was a crowd, they were doing a great job managing it.  While waiting in line, we saw a dad leave with his daughter.  She was dressed as Robin complete with cape, mask, and tutu.  It’s always wonderful to see parents getting their kids interested in geeky pursuits from a young age.  (I would have taken a photo, but people seem to get weirded out when random strangers take photos of their kids.  Go figure.)

NHL did have a mini-melt down at one point.  Waiting in lines isn’t always easy for those on the spectrum.  Especially pre-teens on the spectrum who hate having their photo taken and whose dad loves taking photos of everything.  Luckily, I was able to keep my cool and try to help NHL keep his.  (All too often, my Autistic fixations and NHL’s will clash and the results aren’t pretty.)

As we approached the front of the line, out trotted the Penguin.  My boys loved seeing him, but unfortunately we couldn’t get a photo of him right then.  It was time to walk up the stairs and get some comic books.

There was a limit of four comics each and three of us, so we were able to choose twelve total.  (A thirteenth came from a stop by a local library which was having a Free Comic Book Day event also.) 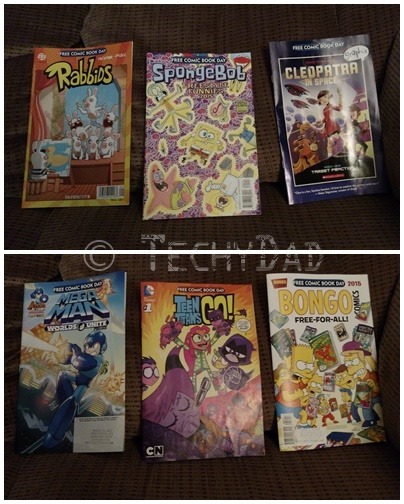 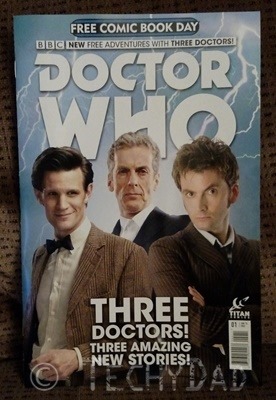 As we were picking our comics, we didn’t see any sign of Harley Quinn or Poison Ivy, but we did spot Black Widow again.  It was great seeing her again.  This year, it probably meant more to them meeting her as my boys have now seen all of the Marvel movies and so really know just what a great superhero Black Widow is.  Even if she doesn’t have any super powers, she can hold her own against any foe.  Just when you think you’ve got the upper hand on her, she reveals that she let you think that so you’d drop your guard.  She’s sneaky, strong, and very smart. 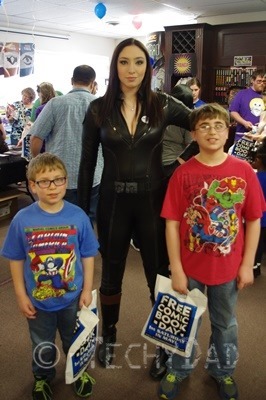 We were done getting our comics so we headed back downstairs and were about to walk out when HE walked in.  Slade Wilson.  Now, my boys know him from the Teen Titans cartoon show.  Pre-Teen Titans Go!, that is, though JSL is a huge fan of that show now.  JSL was so excited to get a Slade WIlson Imaginext toy from his brother on Chanukah.  (He loves playing with those and will spend hours coming up with story lines and running his characters through various routines.)  We just HAD to get a photo with him – but decided to leave quickly afterwards as it looked like he was itching to draw that sword. 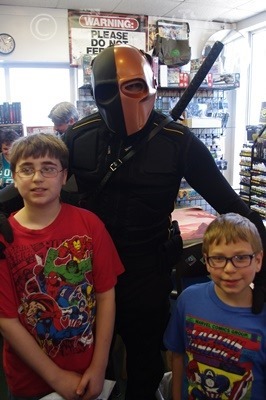 Outside, we approached the Penguin.  Despite his reputation as a dangerous criminal, the Penguin seemed like a great guy.  We was waddling around waving to cars and greeting the crowds who showed up to the store.  That umbrella could have been really handy to get some shade.  (I think my body is still in "winter cold" mode and doesn’t know how to handle the sudden influx of warmth.) 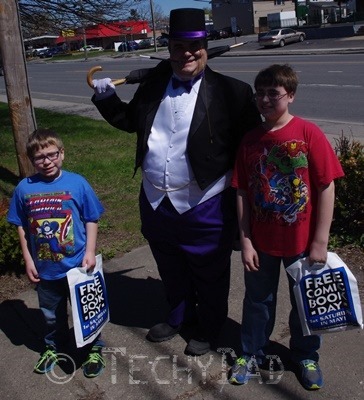 And, yes, JSL has an Imaginext Penguin figure also.

We were about to leave and yet we still hadn’t seen Harley Quinn or Poison Ivy, but then we spotted Ivy.  She was walking through the crowd asking questions for a podcast she was running.  She graciously stopped so I could get a photo of her with my boys.  (Shhh… Nobody tell JSL but he’s getting an Imaginext of Ivy for his birthday next week.) 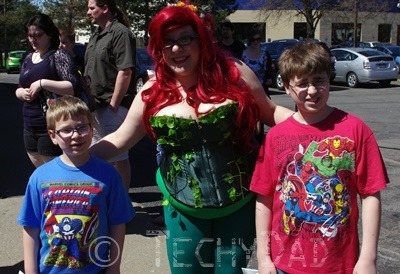 It was a disappointment to not see Harley Quinn.  She’s been a favorite of mine ever since Batman: The Animated Series (Mistah Jay!), but we definitely can’t complain having seen such wonderful heroes and villains.

Did you go to your local comic book store for Free Comic Book Day?  If so, what was your favorite part of it?

Note:  I did a little Internet digging to see if I could credit who played all of these great characters, but turned up empty until I looked up Poison Ivy.  It looks like she’s Amanda from Undiesofwondy.com.  Thanks for helping to make our Free Comic Book Day memorable, Amanda, and hope that we didn’t interrupt your podcast too much! 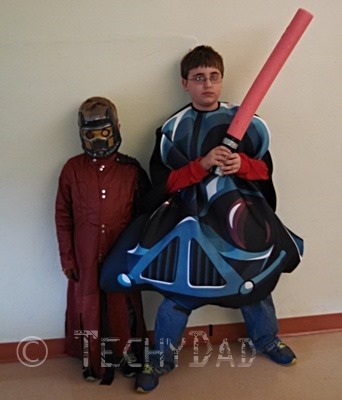 Geek Weekend – Free Comic Book Day and May The Fourth 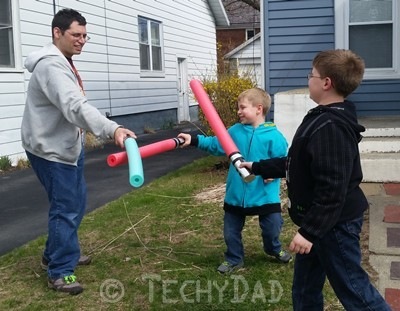 This weekend is going to be a very big couple of days for geeks all over.

Tomorrow begins the celebrations with Free Comic Book Day.  Every year, on the first Saturday in May, comic book shops around the globe give away comic books.  I’ve written before about our previous free comic book day trips.  I hope to go with the boys again this year.  I’m not sure if our local comic book store will have people dressed in costume like they’ve had last year, but it’s always fun to see what comic books interest the boys.

Sunday is May the 4th.  Star Wars fans, noticing the similarity between the day’s name and the Star Wars quote "May the Force be with you" have adopted this day as "Star Wars Day."  We already have our foam lightsabers ready to go.  (We might take them with us to Free Comic Book Day as well.)  Unfortunately, the weather doesn’t look like it will hold out to allow us to conduct some lightsaber battles outside.  We might need a raincheck for that.

Will you be attending Free Comic Book Day?  How will you celebrate May the Fourth?

On Friday, I posted about Free Comic Book Day.  Well, when Saturday came, we headed over to Zombie Planet in Albany, NY.  We arrived and headed up to their comics area.  There we were met with a table full of comic books. 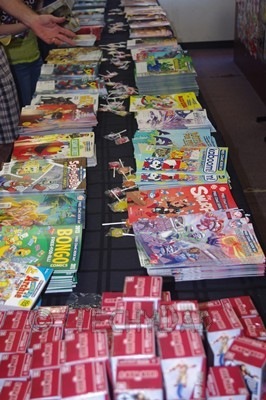 The comics were guarded by none other than Doctor Doom! 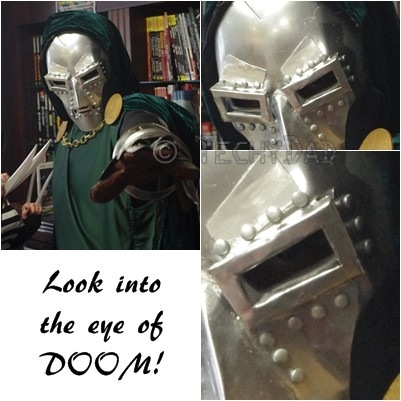 Thankfully, Doom was busy facing off with X-23. 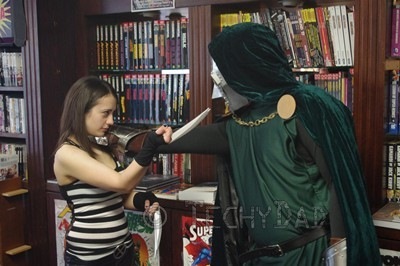 In the end, we were able to get plenty of comic books (four per person) and some Iron Man figurines. 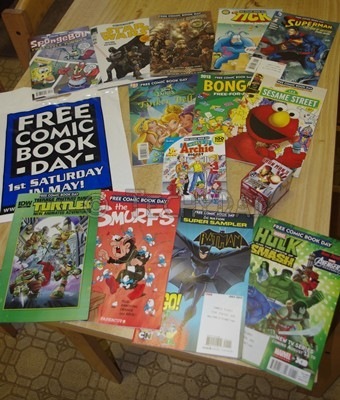 The boys loved reading their comics and are already asking about another trip back to the comic book store.

How often do you stop by your local comic book store?

Free Comics On May The Fourth 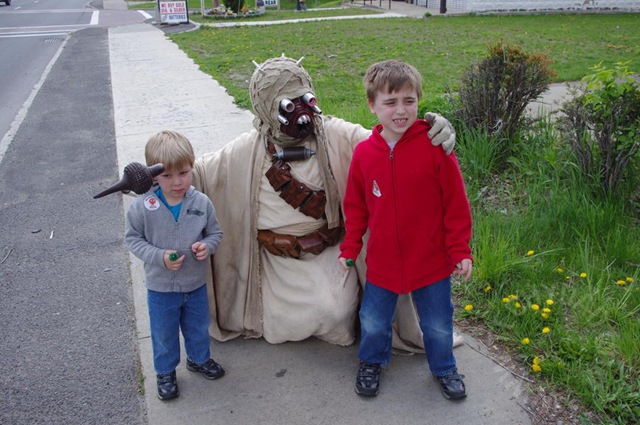 Tomorrow is May the Fourth, also known as Star Wars Day.  ("May The Fourth/Force Be With You.")  This seems like the ideal day for some geeky activities.  Thankfully, tomorrow is also Free Comic Book Day.  Yes, tomorrow, comic book shops all over the United States, Canada and many other countries will give out comic books for free. 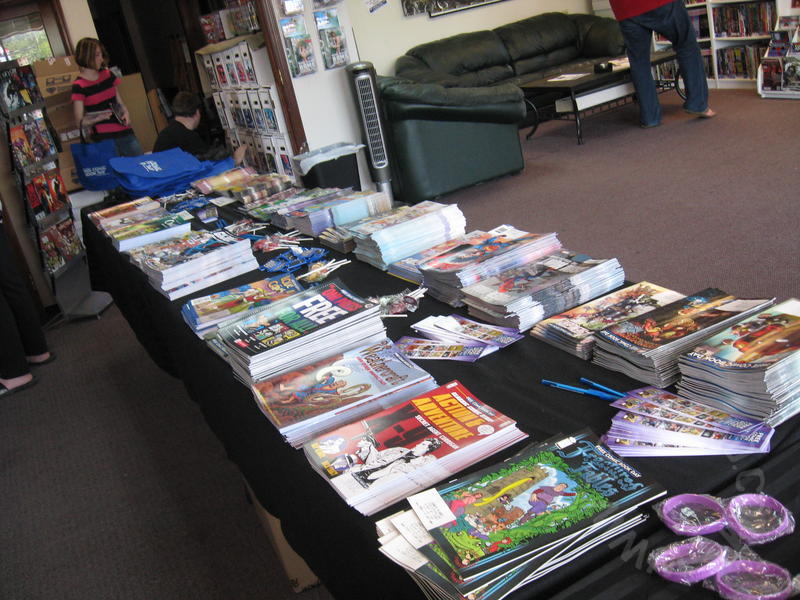 I’ve taken NHL and JSL to Free Comic Book Day two times.  Three years ago, we went for the first time.  That first time, we wandered into the room and the kids jaws dropped when they saw the array of comic books before them free for the taking.  We gathered up some comics, picked up a package of superhero cards and headed home to read our new acquisitions.

The next year, while B was off on a "Mom Field Trip", I took the boys to Free Comic Book Day again.  This time, some people were there dressed in costume.  They got their picture taken with a storm trooper, a Tusken Raider, and Spider-Man. 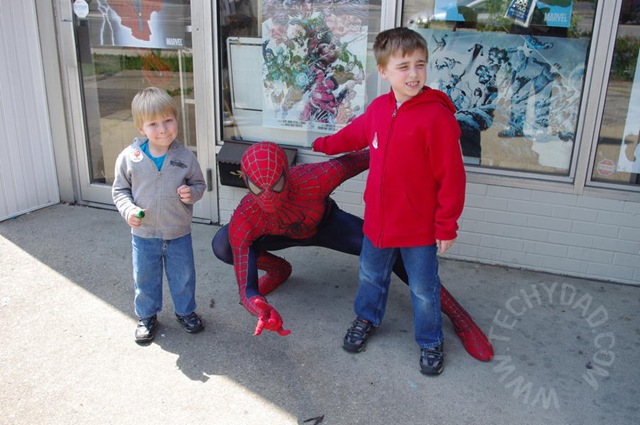 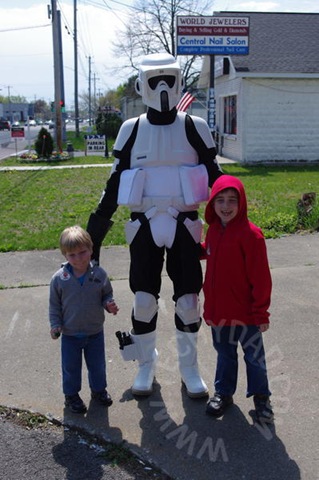 Like the previous year, we got some comic books (this time limited to five each) and later had fun reading through them.

Last year, Free Comic Book Day landed a few days after we had just returned from a trip to Disney World for the Disney Social Media Moms Celebration.  In addition, we had to plan a birthday party for JSL’s upcoming birthday.  With all of the post-vacation/pre-party chaos, we didn’t make it to check out the free comics.

This year, we’re planning to return to Zombie Planet to see the selection of free comics.  I can’t wait to browse the selection with my boys and check out the other geeky goodness that only a local comic book store can provide.

Are you going to Free Comic Book Day?