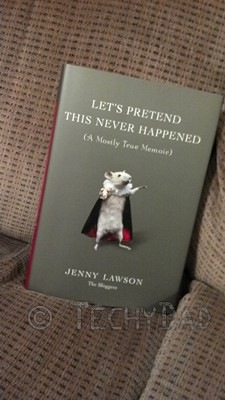 On Saturday, a package arrived from Amazon.  There were a few items in it that I knew of (some crafting supplies), but B was very secretive of one of them.  She told the boys to give me my early Father’s Day present: Let’s Pretend This Never Happened (A Mostly True Memoir) by Jenny Lawson aka The Bloggess.

Now, this isn’t a book review.  For this to be a book review, I would have had to have read the whole book.  No, I’ve only finished 3 of the book’s 33 chapters.  (And, no, I’m not counting the Introduction or Epilogue in either of those because they don’t count.  They’re no real chapters just like Pluto’s not a real planet.  And, yes, I realize that this parenthetical is way too long.)

At one time, I would have locked myself in a room with the book, shut out the world, and finished it in a day.  Maybe two.  However, nowadays, I can’t do this for various reasons.  Kids tend to get cranky when Dad’s been reading a book for hours instead of feeding them.  They get really cranky when Dad chooses reading a book over attending their birthday party.  (As do relatives visiting from out-of-town.)

So this is not a full book review.  Instead, consider it a book pre-review.  I’ve read enough to form an initial opinion.  And that opinion is: I’m hooked.

You might know that I’ve been through some stressful times recently.  I’ve come to rely on video games for stress relief.  Jenny’s book has now been added to my stress relief quiver.  Nothing cures stress like laughing and a few minutes with Jenny’s book had me giggling like Anderson Cooper.

Normally, I don’t giggle as high-pitched as Anderson does, but Jenny’s hilarious stories totally triggered fits of giggles in me.  After a mere five minutes of reading, I felt my stress melt away and I began joking with everyone.  I felt in a better mood than I had felt in some time.  Jenny’s book is filled with funny stories of her experiences growing up.  Experiences that made my own life look downright boring.  From what I’ve read of it, I’d definitely recommend Let’s Pretend This Never Happened (A Mostly True Memoir) by Jenny Lawson.