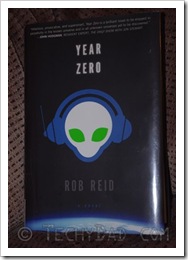 I recently read a review that Phil Plait, aka Bad Astronomer, posted about Year Zero by Rob Reid.  (If the name sounds familiar, it’s because he founded Listen.com which created the Rhapsody music service.  If it doesn’t sound familiar, then never mind.)  In it, there are countless alien civilizations in the Universe.  Most tend to self-destruct, but a few don’t.  These precious few (well, "few" percentage-wise is still many, many civilizations numbers-wise) get to join the Refined League.  By doing so, they gain access to the technological and, more importantly, the art that all of the other civilizations have.

For the longest time, Earth seemed to be a nothing world.  We were primitive nobodies, barely even worthy to be paid attention to.  Until, that is, Welcome Back Kotter aired.  Even this, however, was laughable to the aliens until the closing credits theme song played.

There’s this funny thing about aliens.  They are leaps and bounds ahead of us in every area known to man… er, sentient species, except for one: Music.  Here, we soar beyond any of their wildest aspirations.  In fact, our music is more than just "good" to them.  It has a certain drug-like effect on them.  Human music is like LSD on crack to aliens.  They shuffle wildly, approximating dancing – aliens stink at rhythm, and can even go into a trance-like state where they are aware of nothing but the wondrous sensation of the heavenly tones coming from those otherwise hopelessly backwards Homo Sapiens.

Now, like many music fans, they decided they needed to have copies of the songs.  Since landing in flying saucers en masse was out of the question (for one, they don’t interfere in non-Refined civilizations and secondly they don’t travel in flying saucers), they took the route that many human music fans take: they "downloaded" the music.  Every alien has a copy of every song released since about 1978.

Unfortunately, the aliens are also sticklers for the rules.  They have a law that they need to follow the laws of whatever planet the art form comes from.  And Earth (specifically, the United States) has this pesky copyright law.  When you add up the fines that would result from every alien pirating every song released since 1978, you get more money than the entire Universe.  Yes, thanks to copyright law, the entire Earth (except for North Korea) is now fabulously wealthy and the Universe is bankrupt.  And that’s a problem.  Especially since some aliens would like to see the debt wiped out by any means necessary.  Even if it means humanity is wiped out.  (Hard to collect on your debt when you’re kaput.)

Rob Reid takes this setup and runs with it in a way that alternates between hilarious and insightful.  (Often being both at once.)  His characters struggle against impossible odds to find a way out of this situation.  Their travels take them from New York City to the other side of the Universe and back again.

I found this book as addictive as the aliens in it found humanity’s music.  I couldn’t put it down for more than a few minutes.  When I did, I found myself finding excuses to sneak off with the book just to read a few more pages.  A few times, I thought I had figured out how they would solve the problem.  I was even close once, but not close enough.  The actual resolution makes perfect sense and is one of those "why didn’t *I* think of that" situations.

The entire book is told from the main character’s point of view and, just to add to the fun of the book, there are footnotes scattered here where he adds background to sections, terms, or statements that characters make.  I was drawn into this world and it would not let go until I finished the very last page.  (Yes, I read all 357 pages in 2 days!)  The story was just too engrossing not to keep reading.  And even when you think everything is tied up in a nice little package, the author tosses a new wrinkle (albeit one he mentions earlier in the book but then gets conveniently "forgotten" about until the end) that not only adds an interesting twist, but also possibly sets up a sequel.