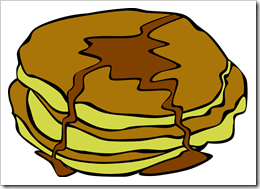 While I’ve written about my boys being fussy eaters before, lately it has gotten worse.  JSL’s usual breakfast is Boost – a protein shake that gives him vitamins, protein and other healthful stuff hidden behind a chocolaty flavor.  He calls it "chocolate drink."  I’ll admit I’m not 100% happy with him thinking that chocolate = breakfast, but – between that and eating nothing – I’ll break out the Boost.

The past couple of weeks, however, he’s been refusing chocolate drink.  So we offer waffles, bagels, chocolate chip cereal bars… Nope.  All refused.  He insists that he’s not hungry, but we know better.  If he doesn’t eat breakfast, then he’ll be hungry long before lunchtime.

It’s not like we’re expecting him to eat a three egg omelette, stack of pancakes, hash browns, and a giant bowl of fruit salad.  Just eat half of a bagel with cream cheese and we’ll be happy.  Instead breakfast time has become "fight to get JSL to eat something before he goes to school" time.

My Aloha Friday question for today is: What do you usually eat for a quick breakfast?

Disclaimer: The "Fast Food, Breakfast, Pancakes" image above is by Gerald_G and is available through OpenClipArt.org. 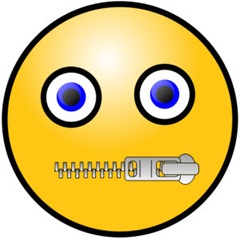 I have some really big news.  Huge.  This news is so big that it has rattled my very idea of who I am.  I want to shout this news from the rooftops, tweet up a storm, and dedicate a fifty part blog series about it.  There’s only one problem: We’re not ready to blog about it just yet.

You see, this news affects the kids as well and, until some things are settled, we’re not going to publicly discuss it just yet.  So, until then, I need to keep quiet.

My Aloha Friday question for today is: Do you manage well with big news that you can’t yet share?

Disclaimer: The "zipped mouth" image above is a compilation of "Zipper" by Deluge and "Emoticons: Worried Face" by nicubunu.  Both are available through OpenClipArt.org. 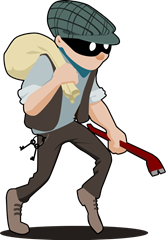 On Tuesday, after Rosh Hashana services, NHL and I began having a discussion.  As our talk wandered from Rosh Hashana to Yom Kippur, I told NHL that the purpose of Yom Kippur was to apologize for our transgressions.  However, I informed him that saying you are sorry wasn’t enough.  If you were truly sorry, you wouldn’t repeat your misdeeds.

I gave him the example of a bully I had back in middle school.  This bully claimed to be my best friend.  He even acted the part much of the time.  Then, he would begin to mock me, stab me in the back (literally, he used a sharpened pencil), and would torment me in various ways.  After awhile, he apologized.  He claimed that someone had told him that I had said nasty things about him.

Being extremely naïve, I took him back as a friend and everything was fine for awhile until he tormented me again.  The pattern repeated itself over and over.  Tormenting, apology, naive-younger-me refusing to believe that his one friend was really not a friend at all.  Finally, I couldn’t deny it any longer and I refused to accept any more apologies from him.  I finally realized how worthless his apologies were.

Recently, NickMom has raised some folks’ ire.  Amy, aka ResourcefulMommy, has a good summary of what happened.  Short version: NickMom rips off HowToBeADad. NickMom is caught and apologizes.  Then, NickMom is found to be stealing more content.  Including photos of peoples’ kids.  Including photos of peoples’ kids with the watermarks covered over by NickMom.  They apologize again and take it down.  They even issue a blanket statement that they’ll take down any content that the creators complain about.

Here’s the problem, though.  Their apology means nothing.  Of course, they’ll take down the stolen content when people complain about it.  If they don’t, they face copyright infringement fees of $750 – $150,000 per incident.  However, they have shown absolutely no willingness to stop the copying in the first place.  They know that their editors are lifting content and yet they just stay the course.  Without even the slightest bit of effort to change their ways, their apologies mean nothing at all.

My Aloha Friday question for today is: How do you handle an insincere apology?

Disclaimer: The "burglar" image above is by tzunghaor and is available through OpenClipArt.org. 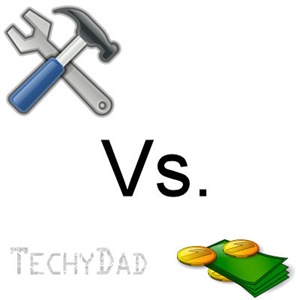 Recently, I’ve gotten interested in Doctor Who.  I’ve been watching the episodes back to back to back on Netflix.  It’s become a bit of an addiction for me.  I’ll be sitting on the couch trying to get some work done and the Roku remote will start calling "Dooooctor Whoooo! Doooctor Whooo! Watch another episode of Doctor Who!"  (I should probably call it a night when my electronics start talking to me.)

Since I love the show so much, and since I’m such a geek, I wanted to get some Doctor Who merchandise.  Luckily, ThinkGeek has plenty of Doctor Who items to choose from.  My favorite are the sonic screwdrivers.

For those who don’t watch Doctor Who, the Doctor isn’t one to brandish a gun and blast his enemies away.  He’s more likely to outthink them.  His tool of choice is a very special screwdriver that’s totally sonic.  It can open nearly any door and can override computer systems.  It’s the Swiss army knife of the Time Lords.

Of course, the sonic screwdrivers you can buy don’t really work like the Doctor’s.  Most of them are flashlights (a logical leap as the Doctor’s lights up when he uses it), but a couple are pens or even TV remotes.  As I was looking through them, I began to wonder which one to get.  Then a thought occurred to me: Why don’t I try making one myself?

I’ve long admired and envied geeks who build things.  I always think I don’t have the knack for it, but honestly I’ve never really tried that hard.  I’m not going to fool myself and think that my creation will fool people into thinking it’s the real thing, but maybe I could make my own passable sonic screwdriver.

I’m thinking I’d start with a pen, put some kind of metal tubing around it and add some embellishments around that to make it look less like like a tube-with-a-pen and more like a sonic screwdriver.  If I’m really feeling ambitious, maybe I’ll figure out how to wire up an LED light so that my sonic screwdriver pen can light up.

Yes, buying it would be faster and easier (maybe cheaper as well) and yes, it would probably look nicer, but a handmade sonic screwdriver could be fun and even educational (for both me and my boys).

My Aloha Friday question for today is: Do you usually "build" your own items or buy them?  If you usually build, any advice you can give for where to go or how to approach this project would be appreciated.

Disclaimer: The "build vs buy" image above was composed of "Tools, Hammer, Spanner" by Andy and "Money – banknotes and coin" by n_kamil.  Both images are available through OpenClipArt.org. 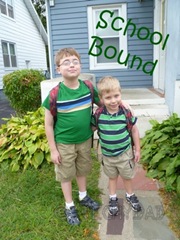 This was the first week of school for NHL and JSL.  NHL is now in the fourth grade.  After a very rough second grade and some moments in the third grade that made us want to break down and cry, we’ve got some hope that this year might improve.

JSL, meanwhile, is now starting kindergarten in the same building as NHL.  The transition hasn’t been easy.  He’s embarking on a brand new adventure, but he is scared of the change.  Drop offs have been filled with tears (both his and B’s).  Still, once he gets into the groove, I know he’ll have a blast.

My Aloha Friday question for today is: How have your kids taken to the start of the school year?