This post is a day late thanks to a lot of Birthday excitement. And by “excitement”, I mean things going wrong left and right. The plan for B’s birthday was to drop the kids off at her parents’ house and then go out to eat. B had even decided that we would go to a nice Japanese steakhouse for her birthday meal.

Then the excitement arrived and our plans went out the window.

First, JSL started acting funny. He didn’t have a fever, but seemed to be coming down with a cold. He was very stuffy sounding, like he was having trouble breathing. A few days later, B came down with what we think was the same thing. She would be up late in the night, feeling horrible and unable to sleep.

Then came winter. Yes, I know that it technically isn’t winter, but when the weatherman says we’re going to get 3 inches of snow followed by sleet, you’ll forgive me for mistaking the seasons. We weren’t relishing going out in that weather, so we decided to take a raincheck on dinner out. Besides, B wanted to be able to actually taste her food and enjoy the time out.

When her birthday morning came, I woke up with a headache and sore throat. Worrying that I was coming down with what she and JSL had, I called in sick. Still, at least one thing went off without a hitch. Her presents. A couple of weeks before, NHL, JSL and I went out for a Boy’s Shopping Day Out. (This was before the playground Boy’s Day Out.) We went looking for a present to get B and wound up finding a Snuggie. I had remembered B complaining the previous night of being cold, so I thought this was perfect. The night before her birthday, I kicked her out of the room so NHL could write out the card to B. (I let JSL draw on the back of the envelope since drawing on the card itself wasn’t working.) So the boys gave her a Snuggie and I got her a Pandora charm and a year’s subscription to Picnik.

Then, sickness or not, I had to shovel. So out I went to shovel snow aided by NHL and JSL. Ok, JSL was armed only with a gardening shovel we found, but he still tried to help. After some shoveling and snow playtime, we went inside for a bit. After lunch, I decided to shovel a bit more with NHL. Of special importance was getting our cars cleared just in case we needed to head out. JSL remained inside to help B bake her birthday cake. Yes, she had to make her own cake!

While out shoveling, I dug a path past both of our cars on the driveway, intending to go back and clear the other side. That’s when the plan alterations went nuts. As I bent down to get another shovelful of snow, NHL walked close. I didn’t see how close he was as he bent over to shovel snow too. My shovel came up and struck his head just above the outside corner of his left eyebrow. I immediately saw blood gushing from his head, called B and got NHL to the front door.

We applied pressure to stop the bleeding and assessed the wound. It wasn’t a very big cut, but it certainly looked deep. This was definitely more than a band-aid would fix. Since B’s cake was in the oven and her car (with JSL’s seat) was in front of mine (and thus blocked), we decided that I would go with NHL to the ER. Luckily, B’s mother was available to accompany us.

Of course, I hadn’t cleaned off my car yet. So out I went to do a quick clean of my car and then NHL and I swung by B’s parents’ house to pick up B’s mother. The whole way there, NHL was nervous. He remembered getting stitches a few years back and specifically remembered them hurting coming out. We got into the ER and waited a short time while NHL played with a magnet/sand table. (It’s completely enclosed. You control the items in it via magnets underneath the table.) By the way, these photos were taken with my cell phone camera, so I apologise for the poor quality. Obviously, good quality photos weren’t high on my priority list leaving the house. 😉 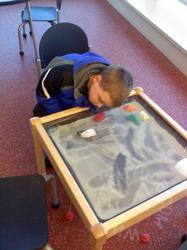 Nurse S then called us into the exam room and, from the get-go, she was great. She talked directly to NHL whenever possible, asked him if he would like a drink (then got him some apple juice), talked him through everything she was doing (weighing, blood pressure, temp check, etc), and sat down to talk with him about what the options might be (glue, dissolvable stitches). Then she escorted us to our room. NHL was still nervous, but wasn’t outright scared now.

After another short wait, some nurses and a doctor came in to examine NHL’s wound. They said they should be able to use glue and put some stuff on it to numb the area. NHL watched TV while we waited for the numbing to take effect. 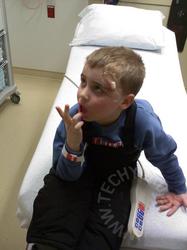 When “glue time” came, the doctor and nurses came back in, held NHL down (gently yet firmly) so he wouldn’t kick anyone or move while glue was being applied so close to his eye.

Quick aside. I’m an expert at holding NHL down. I’ve had to do it with him on many occasions from getting blood drawn to getting flu shots put in. He doesn’t like to stay still and will flail any and all limbs until he wriggles free. These people did an expert job holding him down without hurting him. My hat is off to them and I would like to request that they accompany us the next time he needs a shot. 😉

Before we knew it, we were heading out of the ER with a patched up NHL. 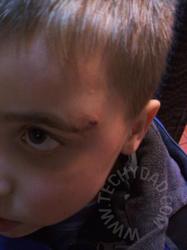 As we headed home, I called B to see what she wanted for dinner. It was almost 6pm by this point so cooking something wasn’t really a viable option. We decided on Chinese food so the three of us swung by a Chinese food restaurant near our house. B’s mother got something for her and B’s father while NHL and I ordered (after calling B to get her order). Chinese food in hand, we dropped B’s mother off and then headed home.

The rest of B’s birthday was pretty uneventful. The boys ate well, sang Happy Birthday to B, had some cake and went to bed. We ate some cake also and turned in early. 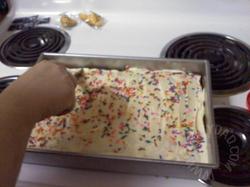 All, in all, it wasn’t the birthday celebration that I was hoping to give B. I didn’t even get the chance to write the blog post that I wanted to write for her. So I’m going to end this as I had hoped my entire post yesterday would have sounded (with only date references changed, of course).

Yesterday was the birthday of someone very special in my life. She’s the person I love waking up next to every morning and falling asleep next to every night. She’s my best friend, wife, lover and one of three people whom my world revolves around. Of course, I talking about B (aka TheAngelForever). I am always so grateful that fate brought us together that day (in a Yahoo Chat Room) and that I was lucky enough to marry her. She’s modest to a fault at times. (I keep telling her that she is sexy. Maybe one day she’ll say “thank you” instead of “no, I’m not.” Oh, and B, yes you are! 😉 ) She is feircely protective of those she loves. (Trust me, you don’t want to be on her bad side.) She is a fantastic mother to both of our children. I love her with all of my heart and will strive to spend every day making her as happy as she has made me. Happy birthday, B!