While we were at Disney Social Media Moms, we were included in a dinner along with 400 volunteers. At the time, we thought that the food that we ate was part of a Robert Irvine/Dinner Impossible challenge. Sadly, it turned out not to be the case. The volunteers got Irvine’s food and we “just” got Disney food. I say “just” because the food was exceptional (as is par for the course at Disney). In fact, having seen what Robert Irvine created, I’m happier with what we were served. Still, it would have been cool to have been part of a Dinner Impossible challenge.

One dessert in particular stood out. It was a warm brownie torte that tasted like it was uncooked warm brownie batter (and I mean that in the best possible way). Here’s a photo, although Disney Food Blog has a better one. 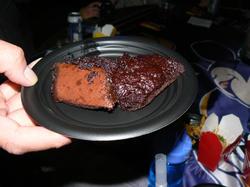 We had gotten a couple plates of these and when the boys (who by this point in the night were exhausted) refused it, I ate the second plate. For some reason, my chocolate-brownie-lust overpowered my brain and I only realized too late that I had eaten B’s plate! I vowed to recreate the dish as soon as I saw how it was made on Dinner Impossible. Of course, once the episode aired, it became apparent that this dish wasn’t part of the show. I’m on my own now in recreating it, though I have a few ideas.

My Aloha Friday question for this week is: Have you ever recreated a dish you’ve eaten out somewhere? If so, how successful were you? If you haven’t, is there a particular dish that you’d love to be able to recreate?

Oh, and if anyone has any pointers for recreating this, I’d be happy to hear them.