A Seder Filled With Pandemic, Lost Teeth, And No Internet 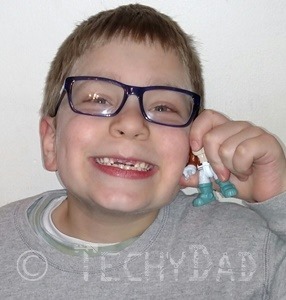 Friday night was the first night of Passover.  As such, we had the first Seder.  It was nice and the boys enjoyed it.  They even stayed up until the very end – going to sleep at 12:30am!  (Their bed time is usually 8:30pm so this was quite the late night for them.)  The next day/night, though.  THAT’s when things got interesting.

As the second Seder neared, we decided to give the boys a snack.  After all, there’s a lot of stuff to get through in a Seder before we eat.  So, among other snacks, I cut up some apples for us to share.  Now, JSL had two very loose teeth for some time.  They were actually pointing outward a bit which was quite creepy to look at.  The first one came out after JSL bit into a slice of pizza at an Autism fair.  (I ran with him to the bathroom to extradite the tooth.)  As he bit into an apple slice, the second tooth began to bleed and got very wiggly.  As much as I shook it, though, it wouldn’t come out.  The bleeding stopped, though, so we made our way to the Seder.

Once we arrived, the boys and I played a few games with one of B’s relatives.  It turns out that he’s quite the gamer and brought along Pandemic.  He explained the game as he set up for the four of us. We didn’t get to play the whole game (as the Seder started), but what we did play was very different from other games I’ve played.   In other games, you are out for yourself (and, perhaps, a teammate) trying to beat the other players.  In Pandemic, all of the players are working together.  You don’t sabotage the people playing with you, but try to figure out ways to help them.  After all, you are all playing as medical professionals fighting a series of illnesses.  If you all lose, the illnesses spread out of control.  If you all win, the illnesses are eradicated.  I could definitely see playing this with B and the boys to help NHL understand how to work with people to achieve a goal.  I could also see this being used in an office environment as a team building exercise.  I’ve been eyeing the game ever since that night and it’s only a matter of time before I buy it.

The pre-meal portion of the Seder passed without anything unusual happening.  Which is saying something considering that B’s family’s Seder routinely involves people being whipped with scallions, her uncle talking like one of her aunts, and another relative of hers read her passage with liberal use of the Hebrew word shadayim (breasts).  (It’s quite a fun Seder.)  As we began eating the meal, JSL eagerly started eating the matzo ball in his soup… and then screamed out.  His tooth was bleeding again.  I was prepared and took him away from the table where this time the tooth came out.  I wrapped it up, helped him with his bleeding mouth, and comforted him (it was late already and a bit traumatic).

After dessert, the Seder started back up, but we had to leave.  It was already past midnight.  We got home and despite my suggestions, JSL insisted on writing a note to the Tooth Fairy that night.

We also discovered something else:  We had no Internet.  None at all.  It had been getting a bit flaky over the past month.  Honestly, we wondered whether this was intentional due to our cutting cable, but the person on the phone insisted (after trying many things) that it looked like a bad Ethernet port in our cable modem.  Since we own our own modem and don’t rent it from the cable company, we had to buy a new one.  (We figured out that – given how much this one cost us and how long it lasted – we paid about $2.80 a month for it.  So it was a very good deal.)   On Sunday, we decided to shop for modems.

Except there was one problem.

It was Easter Sunday.

Stores are closed on Easter Sunday.

In the end, we found a store that was open, had the cable modem we needed, and at a decent price as well.  We brought it home, got it set up, and… still nothing.  Another call to our cable company and some tests later and we still had no Internet.  Just when I thought we’d need to wait a few days until they could send a technician over, the guy on the phone said he’d try sending a refresh signal to our modem.  Sure enough, that did it.  Which leads me to wonder whether that was the problem all along and whether our old modem is still good.  (We might give it to B’s parents to try since they need to stop renting a modem.)  Either way, we have Internet again and it seems pretty reliable so far.

And that was our eventful Seder.  Instead of "Next Year In Jerusalem", perhaps I should close my Seders with "Next Year… a bit more boring please."

Was your holiday weekend eventful?