Wordless Wednesday: Is It Spring or Summer? 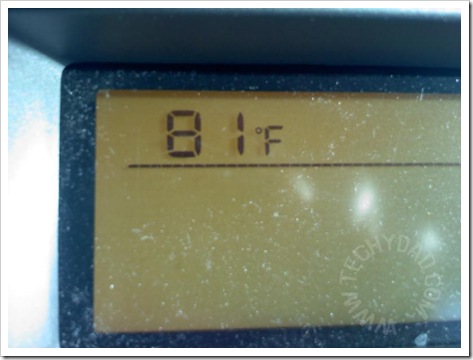 Aloha Friday: Not Ready For Snow

At the time of this writing, I’m dreading a horrible, awful event that is going on outside: The first snowfall.

For the longest time, I was in denial that the summer was over.  Through September, it was easy to keep this up.  The weather was still pretty warm and the leaves were green.  Then the leaves began changing and falling to the ground and the air got a chill in it.  I’ve made my peace that autumn is here.

But snow?  Now?  I’m not ready to admit that winter is on the way.  I know that, officially, winter doesn’t arrive until the 22nd of December, but here winter weather doesn’t wait until then.  By then, we’ve already had a few snowstorms.

This one isn’t predicted to deposit much snow.  Half of an inch at most.  Still, it’s the principle of the thing.  I’m not ready for snow and resent winter sticking its frozen head into the autumn that I just got used to.

My Aloha Friday question for today is: Are you ready for winter weather to arrive?

We were lucky and didn’t get any damage directly caused by Hurricane Irene.  There was a brief loss of cable/Internet, but no power outage.  Despite the trees making us nervous by swinging wildly, no limbs came crashing down.  There was some wetness in our basement, but not big flooding.  The latter was caused more by a lack of waterproofing in some areas.  Add that to the giant Things That Need To Be Fixed Around The House.

The major “damage” was the loss of our planned 10th anniversary trip to Disney.  Thankfully, we got a full refund from Southwest and Disney and are trying to figure out how and when to reschedule it.  More about the trip in another post.  For now, I want to talk about the one piece of damage that occurred.  The self-inflicted hurricane damage.

We heard about people putting bags of water in their freezer pre-hurricane.  The theory is that the water will freeze and 1) keep your freezer cold should the power go out and 2) give you water to use should you lose water.  So I did this.  I took four gallon sized Ziploc bags, filled then with water and carefully put in the freezer.

As the hurricane passed, I began to think about what to make for dinner.  Since we still had power (but weren’t sure if this would last given the blowing trees), I decided to quickly heat some frozen meals.  I went to the freezer and tugged.  It wouldn’t budge.

Our refrigerator is one of those models with the fridge on top and a freezer drawer on the bottom.  At times, items will get wedged in there making it tricky to open.  I immediately though of the water bags and figured that they expanded and got stuck.  So I tugged more.  B came over and we both tried.  She got nervous that the entire fridge would fall on me.  No matter how much I pulled, though, it wouldn’t budge.

Finally, I gave it one last big pull and heard a cracking sound as it opened.  I looked and immediately saw what went wrong.  One of the bags had sprung a leak.  The dripping water ran all over the freezer drawer’s track and formed a solid ice block.  I took out the ice bags and tried to figure out how to remove the ice without thawing the entire freezer.

My solution was to get our hair dryer out.  I set it on the highest and it worked wonderfully to melt the ice off of the tracks (and anywhere else I found it).  Finally, the freezer was fixed and I closed it.

Except that it wouldn’t close right.  The formally-iced-up side closed fine, but the other side was still open a bit.  After another 10 minutes of trying various things, I realized that the tracks weren’t aligned right.  I pushed the freezer shut until it clicked back into place and now it seems to be working fine.

Lesson learned: Next time I put a bag of water into the freezer, put it in a bowl to catch any leaking liquid!

Irene Was Not A Fail 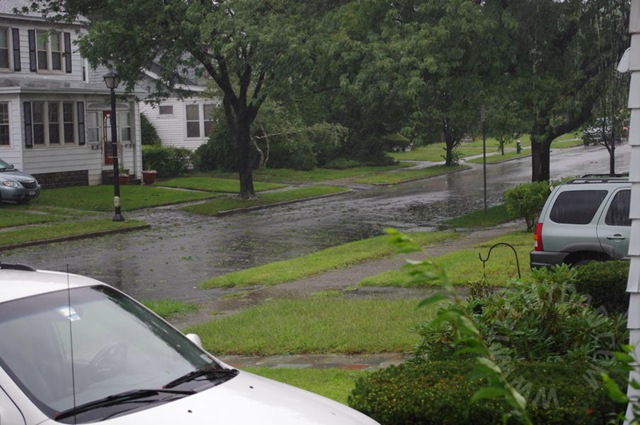 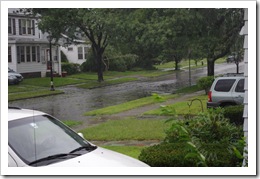 As Irene passed and the winds and rain died down, I noticed something strange on Twitter.  Some people were saying that Irene was all hype and a Fail.  I couldn’t disagree more.

No, Irene wasn’t as destructive as she could have been.  If anything, though, that’s a win, not a fail.  If Irene fails to kill more people or destroy more property, we win, we don’t fail.  Besides, I’d rather the government err on the side of saving lives instead of doing nothing.  Had government officials said “Irene’s all hype, don’t evacuate” and people died thanks to flooding in low-lying areas, people would have been criticizing them for Katrina-like inaction.

Besides, it’s not like Irene was without consequence.  Thousands lost power.  Many areas flooded.  Some people were even killed.

On a much less serious note, Irene forced us to cancel our plans.  We were going to leave the kids with my parents and then go to Disney World to celebrate our 10th anniversary.  The vacation was all planned out.  We had restaurants we were going to try (that we normally wouldn’t go to with the boys).  We had also purchased Hidden Mickeys: A Field Guide to Walt Disney World’s Best Kept Secrets and planned on going on some hidden Mickey scavenger hunts.

With Irene bearing down on our house and my parents’ house, and flooding and power loss (not to mention house damage) a real possibility, we decided to cancel the trip.  We didn’t want to be stuck at home, unable to go on the trip, and lose out on all the money we had paid.  We got refunds, but we’re still extremely disappointed that we didn’t get to go on our romantic Disney trip.  It’s not downed trees or extreme flooding, but Irene had an large affect on our lives.

On Tuesday, an earthquake struck Virginia.  The shaking was felt all the way to New York.  For some reason, though, I didn’t feel anything.

While this was going on, Hurricane Irene threatened to hit Florida.  This brought back memories of growing up on Long Island.   There were two hurricanes that I can remember: Gloria and Bob.  Gloria slammed us hard.  Trees were knocked over, cars were smashed and houses had extensive damage.  A tree in our yard fell over towards my room.  At the last second, a gust of wind blew it to the one safe spot on our lawn.  (I was in my room at the time and might have been injured had it hit.)  Down the block, a neighbor had 2 cars in his driveway: a brand new one and an old one.  The old one suffered no damage, but the brand new one was smashed by a falling tree.

Years later, Hurricane Bob hit Long Island.  This one wasn’t as severe as Gloria.  I remember my mother went out during the storm to deliver some food to a family who was in mourning.  Looking out my front door, I saw the mailman deliver the mail.  I guess “during rain, sleet and snow” includes hurricanes!  Yes, I ran out in the intense winds to retrieve the mail.  There’s something exhilarating about running through 75mph winds.

There’s nothing exhilarating about Irene, however.  We had plans to see my parents, but Irene is headed right for them.  This throws our entire plan up in the air.  I hate having to “wing it.”  I like the order of a plan.  Even worse, if the hurricane hits my parents full-force, there might be flooding and/or evacuations.  There’s so much uncertainty all around.  The whole situation’s got me stressed out.

My Aloha Friday question is: What earthquakes, hurricanes, or other natural disasters have you experienced?