In the beginning of May, my in-laws went to Disney World.  They happened to be there during the May the 4th, also known as Star Wars Day.  Disney, of course, had some wonderful shirts available for May the 4th.  My in-laws asked if I’d like one and I told them to get me a size large.  When they brought it back and I tried it on, though, it didn’t fit.

A couple of weeks later, thanks to warmer weather, I took out my short sleeve shirts.  I put one on but it was too snug.  So I put another one on and another and another.  All too tight.  Clearly, it was time to lose some weight.

Previously, I had success with writing down my food intake.  It forces me to really examine what I’m eating and not just shove food into my mouth on a whim.  However, writing food items down in a paper notebook is so pre-smartphone.  I did some searching in the Google Play store and found the MyFitnessPal Calorie Counter.

After entering in my details (height, weight, etc.), MyFitnessPal told me how many calories I had every day.  Then, it was a simple matter of entering what I ate into my food diary. 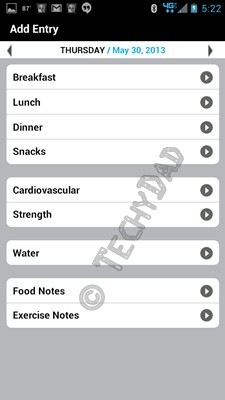 You can search for food. 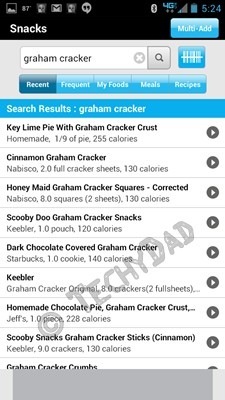 You can enter your own food. 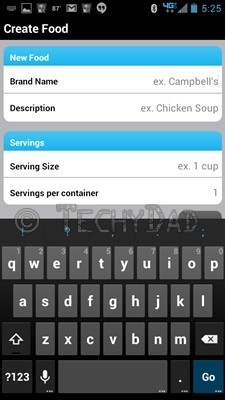 You can select food you’ve eaten before. 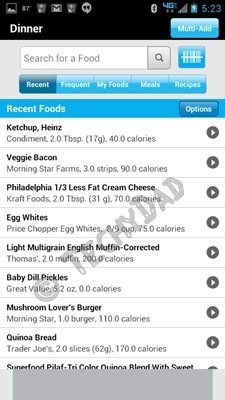 And, in my favorite feature of all, you can scan a barcode to find and enter food items. 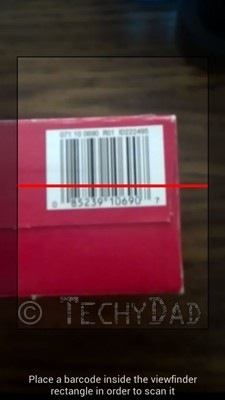 The database of food is very extensive.  I had a new variety FiberOne snack cakes and the app found them quickly and easily.

As you enter in food, the app tallies up how much you have consumed and displays how many calories you have left for the day. 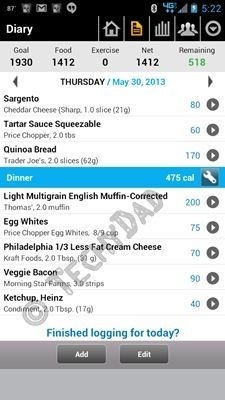 You can also see a detailed analysis of your nutritional intake. 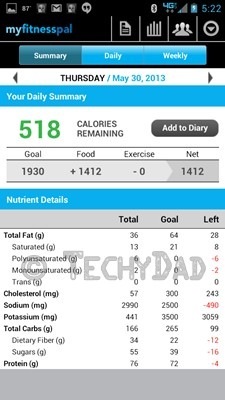 To get more calories to consume, you can exercise.  Exercise is entered just like food only it adds to the calories you have available to you instead of subtracting them. 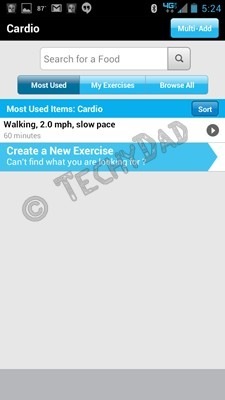 All of your data is synced to MyFitnessPal’s servers so you can enter information in multiple devices.  (There are iOS, Blackberry, and Windows Phone apps as well.)  There’s a lot more to the app including weight charts, but as I’ve been using this for less than a week, I haven’t used these yet.

Overall, I’m loving this app.  It’s so much easier to keep track of what I’m eating than a notebook.  I at first found the calorie count too low, but quickly found that my desire to eat bigger portions was more out of momentum than appetite.  In fact, I’ve found that I typically end days with a few hundred calories to spare.  Finally, while I can’t claim any "official" weight loss due to this being my first week of use, I checked on the scale and definitely seem to have lost two or three pounds.  In any event, MyFitnessPal can be an invaluable aid in a weight loss plan.

A Pledge To Get Into Shape

One of my New Year’s resolutions was to cook more.  Part of my reasoning for this was that I wanted to eat healthier.  In the past, I’ve begun the year with a "Lost 20 pounds in 20 weeks challenge."  I could use one of those again this year as I’m almost 30 pounds above where I’d like to be.

That being said, however, I’m going to try a couple of weeks of an informal diet.  I’m going to cut down on the snacking, eat less and focus on eating healthier food.  I’ll dine on more salads and snack on less junk food.

In addition, I’m going to try to work out more.  I think I’ll break out the EA Sports Active and break a sweat.  There are going to be two challenges for this.  The first is the cold weather.  With such a chill in the air, I’d much rather bundle under my Slanket and let my laptop warm up my lap.

The second reason is that I recently hurt my neck/back.  I seem to be prone to muscle spasms and, after playing some Nintendo Wii with the boys last week, I got a bad one.  The odd thing was that it wasn’t even a high-motion game.  (Kirby’s Epic Yarn – you use the WiiMote like a normal video game controller.)

It’s been over a week now and I’m still sore and achy.  My neck still hurts when I move it and I get shooting pains down my right arm.  I’m not going to let that stop me, but I will take it easy at first.

My other change, rather than not going with a formal diet, is that I’m not going to update every week.  Honestly, for some of my "20 pounds in 20 days" posts, I began to reach for content.  I couldn’t think of anything to say other than "Hey, I lost another pound this week."  While it was nice to know just what I was posting about, I’d rather have more substantial posts.  So I’m just going to post an update every first Monday of the month instead of every Monday.  I may also put something on the sidebar to help keep track of my weight loss.

Disclaimer: The body scale clipart above comes from OpenClipArt.org. 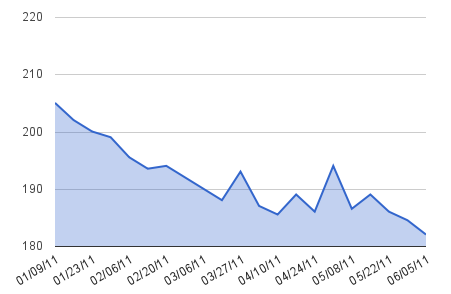 This is the final update in my 20 Pounds in 20 Weeks Challenge.  I hit my goal last week, so this week was mainly about making sure I didn’t slide back above it.

Not only didn’t I slide back above my goal weight, but I shed two and a half additional pounds.  I’m ending this challenge a full three pounds below my goal and twenty three pounds above where I was when I began.

During this challenge, I was using Google Documents to keep track of my points and weigh-ins.  I began using a regular spreadsheet, but quickly realized I’d need to be able to update it no matter which computer I was on.  I switched to Google Documents and it was great.  One of the nice fringe benefits was the ability to generate charts on my weigh-in data and easily export them as images.

Here’s a chart of my weigh-ins from beginning to end.  (Click to enlarge it.) 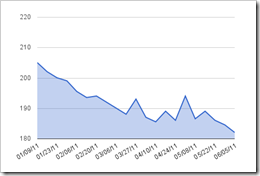 You can see spikes for Disney World, Passover and JSL’s birthday.  Otherwise, it was a pretty steady drop.

Over the next few weeks, I plan to keep eating healthy, but I’m not going to hold as rigidly to the points structure as I did during the Twenty Week Challenge.  Perhaps I’ll check back in in another 20 weeks (that’d be in late October) to see how I’m doing at keeping the weight off.

I’ve done it!  I hit 185.  And passed it.  Of course, I still have one more week in the challenge so I’m not going to call it quits just yet.  I’ll keep track of my points and weight for another week to keep at or under my goal.

Just a quick post to note that I’m closing in on my goal.  I’m a single, solitary pound away from calling this challenge a success.  I suppose I should be happier about this, but I’m not.  Ok, I am happy about it, but it’s not brightening my mood much.  The reason why will be clear in my next post.  Here’s hoping my mood lightens more so I can celebrate next week when (crossing fingers) I hit 185.