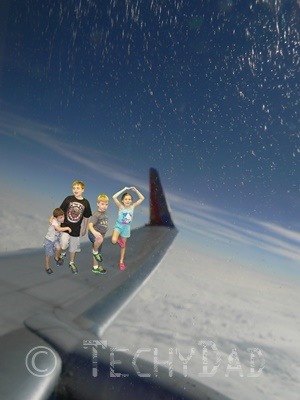 When one is having a birthday celebration for your kids, there is one big rule: Always take photographs so your kids will remember what happened.  For example, I made sure to take plenty of photos since NHL, JSL, and Cousins S and B had a huge adventure to celebrate NHL turning 11.

First, we boarded an airplane.  Note: Keep an eye on your kids at all times when on airplanes.  I looked away for a second and found them on the wing of the plane.

Don’t ask me how they got there or how they withstood the force of the air against them.  Getting them back in was tricky, but we somehow managed it.

When we landed, we immediately went to our destination: Disney World! 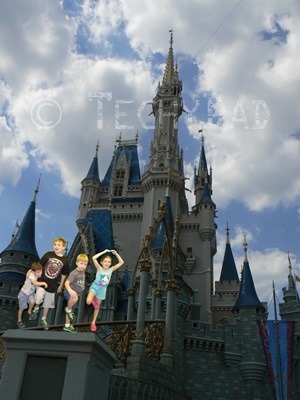 Um, kids, I don’t think you’re supposed to stand there. 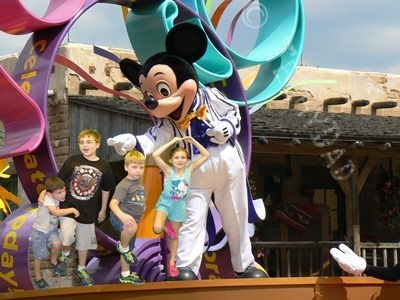 Hey, get out of that parade! 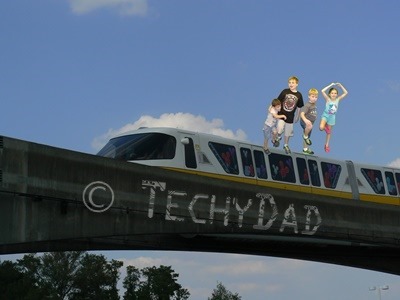 Again, don’t ask me how they got atop the Monorail… Or why they looked so big atop it.  I was too busy at the time worrying that they’d fall off.  (And taking a quick photo or two.  Priorities, people!)

Next, we went on a safari drive in Animal Kingdom.  You’d think that by now I’d have learned my lesson about looking away.  The kids pointed to an ostrich in one direction, though, and when I looked back… 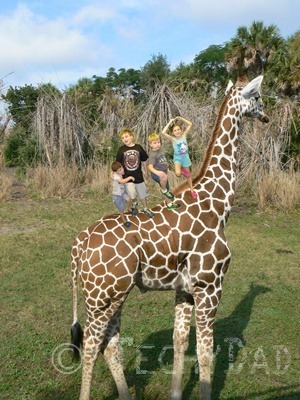 Long story short, we’re not welcome back there again.  Thanks a lot, kids!

At least we were able to go to Epcot, though.  You know, the park with the iconic Spaceship Earth… 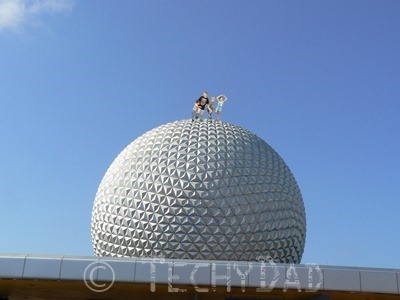 WHAT?!!!  How’d they get there?  No wonder people were screaming as I took this photo.  That also explains the security guard who dragged them back to me.  Silly kids.

At least that’s the wackiest thing they could possibly do, right? 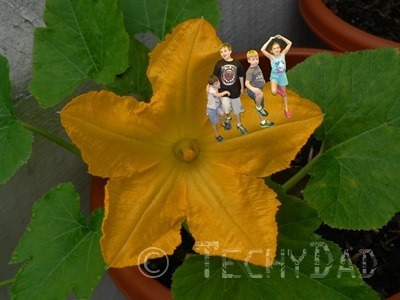 Nope.  They just *had* to sneak backstage and find Wayne Szalinski’s shrinking machine from the old Honey, I Shrunk The Audience attraction.  It took us a few hours before we spotted them on this flower.

At that point, we decided to cut our losses and get home before the kids decided to leave the planet or something. 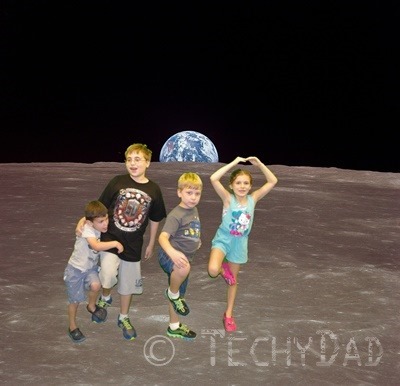 Wait, was *that* where they disappeared to when they took my camera?  How did they even get to the moon anyway?  (I *thought* I saw a blue phone box in Epcot’s England area next to the red ones!)

Thankfully, we got everyone back home and back to the proper size… 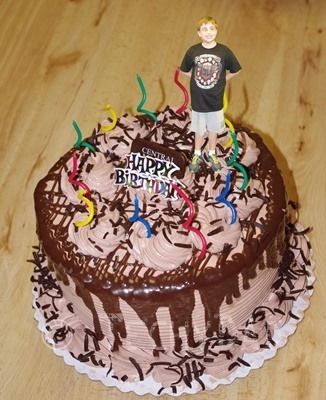 NOTE: All photos above were taken by me with the exception of the Moon photo which comes from NASA.  (All NASA photos are public domain.)  The "green screen" originals are thanks to a green screen in the Children’s Museum of Science and Technology (CMOST) in Troy, NY.

Today, NHL turns 11.  Don’t ask me how this happened.  It’s still a mystery to me.  One minute, we were bringing him home and then I blinked and he grew up.  Now he’s headed to middle school in a couple of weeks.  NHL has a habit of asking me if I’m proud of him, usually for getting some random video game accomplishment.  Here’s what I’m really proud of NHL for:

Part of me can’t wait to see how much NHL grows in another year.  However, another part of me doesn’t want him to grow up anymore.  That part of me just grew when I had to pour over old photos of NHL to compile a special video highlighting NHL’s growth.  Now, if you’ll excuse me, I’ll leave you with the video while I cry over my baby growing up.  Happy birthday, NHL!

Happy Birthday To Me 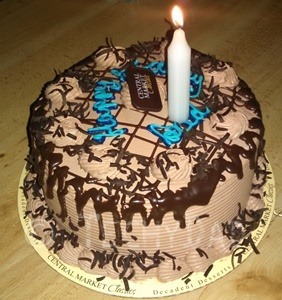 Yesterday was my birthday.  I turned 39.  Only one more year until I need to bid farewell to my thirties and hello to my forties.  (I may be planning out a mid-life crisis already.  Don’t want to leave something like that to chance.  My ideas of a techy mid-life crisis might be the subject of a later post.)

I woke up in the morning, very tired.  The previous night, I had been moving a website I manage from an old server to a new one and it wound up taking longer than I thought.  Thankfully, the boys let me sleep late.  Finally, it was time for a quick breakfast and then come up with something special to do.

That’s when I blanked.

For the life of me, I couldn’t think of one thing I’d like to do that wasn’t really an activity for the boys.  After spending much time racking my brains, B made a genius suggestion.  She asked if I wanted to see Guardians of the Galaxy.  I did but was on the fence as to whether the movie would be fine for the kids to see.  After reassuring me that a friend of hers took her young kids to see it and that most of the inappropriate moments were related to cursing, not violence.  We decided to take a chance on the movie. 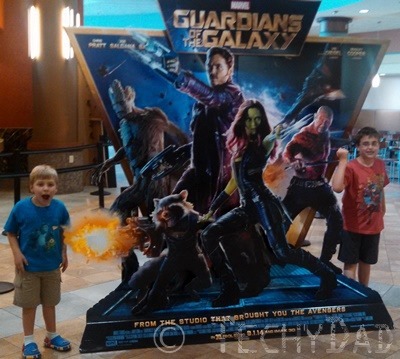 We got to the theater and attended a showing at a Regal Cinema’s RPX theater.  This wasn’t a 3D showing (as JSL doesn’t like 3D movies), but the RPX screen is huge.  It goes from just above the floor of the theatre to the ceiling.  The previews came on and NHL immediately put his fingers in his ears.  As I’ve written about before, NHL is Autistic and has sensory issues.  One of these involves sound.  The noise of the sound system was overwhelming to him.  Thankfully, once the previews began, the volume seemed to level off and NHL seemed to be able to handle it.

Guardians of the Galaxy was amazing.  It was funny, suspenseful, action-packed, and had incredible visuals.  Did I mention it was funny?  I glanced over during many of the jokes to see B and the boys laughing.  The crowd in the theater kept bursting out laughing as well.  I’ve seen all of the Marvel Avengers-line movies (Iron Man, Thor, Hulk, Captain America, and Avengers) and loved all of them.  This one was definitely one of the best of the bunch – and that’s saying something.  Not to spoil anything, but I want a dancing "baby Groot" for my desk.  (As with any Marvel movie, stick around until the credits are done.)  I now think the boys might be able to watch the other Marvel movies with me.

After the movie, we made our way out to a Mexican restaurant for dinner.  I had the Enchiladas Mexicanas – which were cheese, spinach, and refried bean enchiladas served with Mexican rice.  It was delicious. 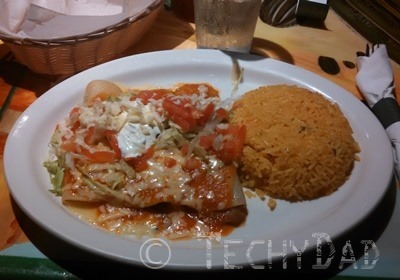 After this, we picked up my cake from Price Chopper and went to B’s parents house for dessert.  B’s parents gave me a cell phone accessory that everyone should have. 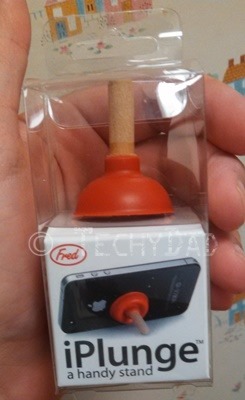 Yes, this is a portable Unicorn horn. 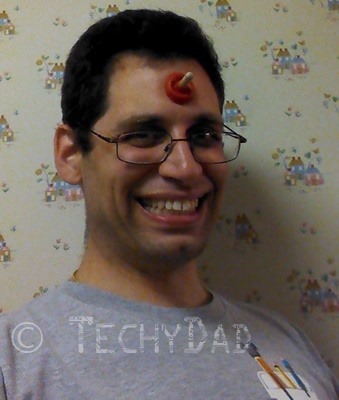 It was a wonderful birthday.  I’d say I can’t wait for the next one, but forty is looming large.  I plan on savoring this next year and hope it crawls by slowly. 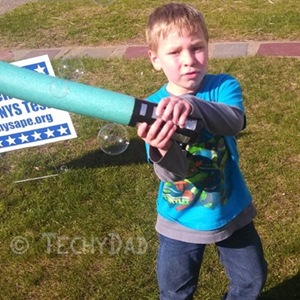 Happy Birthday To The Most Wonderful Wife and Mother Ever 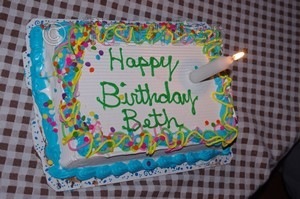 Today is the birthday of the most important person in my life.  She’s beautiful, intelligent, caring, and doesn’t back down when something threatens her family’s well-being: especially if she thinks her kids aren’t being treated right.  She gets between NHL and me when our Aspie sides collide.  She comforts JSL when he’s feeling anxious about something (just before launching an attack against that something if need be).  Whereas I’m the one who makes a phone call if we need a calm, reasonable voice, she’s the one to put on the phone if you want someone who will stand their ground, never give an inch, and fight tooth and nail.

On the other side, she’s proud to show her geek side and will show her knowledge of Disney or proudly wear her Donna Noble shirt to show her love of Doctor Who.  She’s my wonderful angel and I love her with all of my heart.  (Were I a Time Lord, I’d love her with both of my hearts.)