Aloha Friday: The Circle Of Housework 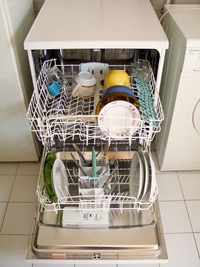 It seems like every time I unload the dishwasher, it is because the sink has filled with dishes and I need to load the dishwasher.  Likewise, it seems as though I’ve just finished vacuuming the rug in the dining room when the boys drop a bunch of crumbs down.  I know B feels the same way with the laundry.  She finishes her last batch, puts the last of the clean clothes away, and suddenly – as if by magic – the laundry hamper is half-full again.  Sometimes, it seems as though the household chores are never-ending.  It almost makes me want to re-write the classic Disney song "Circle of Life" into "Circle of Housework."  Well, except there’s a sink full of dishes that won’t get into the dishwasher if I work on that instead.

My Aloha Friday question for today is: What household chores seem never-ending to you?

NOTE: The Dishwasher Open For Loading above is by Carlos Paes and comes from Wikimedia Commons. 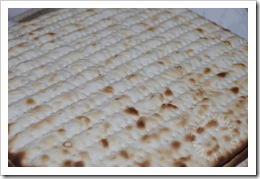 This coming week is going to be a busy one.  You see, Passover is coming.  Some Jewish holidays are easy affairs.  Chanukah just requires a menorah, some candles, and perhaps a dreidel.  Purim is a fun affair involving costumes, triangle-shaped cookies, and noise makers.  However, Passover is anything but easy.

There are many rules about what can and can’t be eaten during Passover and, of course, different people observe different things.  For me, we essentially need to buy only products that are specially marked as Kosher for Passover (with the exception of fresh fruits and vegetables).  There is a general prohibition on any leavened product, so that means no bread.  It also means all cookies, cake, tortillas, waffles, pancakes, cereal, etc. are forbidden.

Of course, I don’t just take out the Passover food, cook it with our usual pots and pans and place it on our usual plates.  Before Passover begins, I need to clean the kitchen and dining room to remove all crumbs.  I need to put away all non-Passover pots, pans, plates and utensils and take out our Passover ones.  I need to clean the fridge, oven, stove, sink, microwave, and dishwasher.  (Luckily, that last one is pretty self-cleaning.)  I also need to make room in the cabinets for Passover items.

In short, there’s a lot of work to do and very little time to do it in.  Thus, while I’ll try to post a few times this week, you’ll forgive me if I take a few days off.  Rest assured that I’m not just slacking off.  I’ll just be very busy getting ready for Passover.

Brother P-Touch and Organizing the Playroom 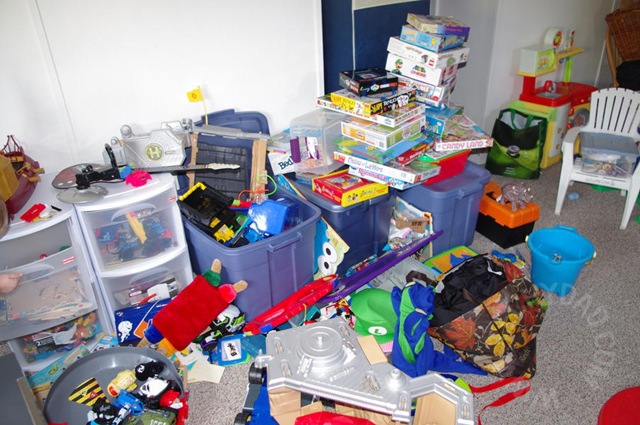 We have a nice, big room upstairs.  We wanted to use it as a playroom.  Unfortunately, for the longest time, the boys couldn’t play in it because the room was just too disorganized and messy.  I had already begun tiding it up when I was contacted by Mom Central about the Brother P-Touch.  It seemed like the perfect compliment to our organizational project.

By the time the P-Touch arrived, I had already mostly organized the playroom.  Of course, it still had plenty of room for improvement. 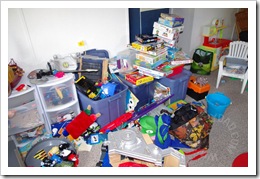 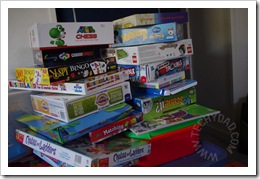 Using a gift card provided by Mom Central and Brother P-Touch for the organizational project, I went to Target and purchased some Rubbermaid storage bins of various sizes and a metal shelving unit.  We had shied away from these kinds of units before, worried that they would topple over on the kids.  This particular unit, however, is one that B’s father has used to keep his many plants.  It is very sturdy, so we got one for our playroom. 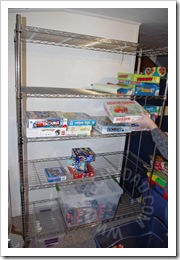 Before long, the mess of puzzles, games and other toys were tamed.  I couldn’t affix labels to the metal shelves, so I purchased some luggage tags.  After putting the labels on these, I hung them on each shelf to show just what belonged there. 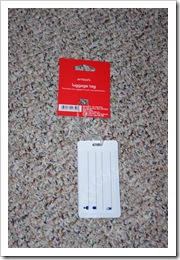 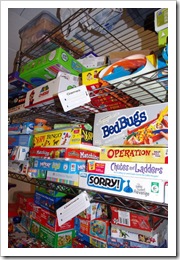 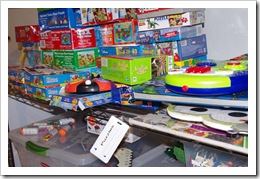 The storage bins were used to store toys such as Legos (previously jumbled in a much older storage bin whose lid didn’t fit on right, Lego figures (tossed in with the Legos and thus often lost), and Hexbug tracks. 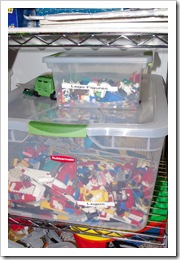 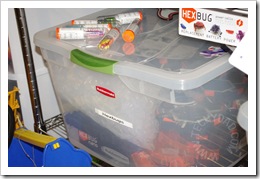 This has really helped us out.  Not only do we have a playroom that the kids can use, but we’ve been able to move more toys into it.  This means less toys downstairs to clutter the living room or the boys’ room.  While before the boys were content to stay downstairs on the couch watching TV, they’ll beg to go upstairs now.  (Despite the fact that the TV up there doesn’t get cable.)  They have no problem putting toys away upstairs (since the “homes” for each toy is so clearly labeled. 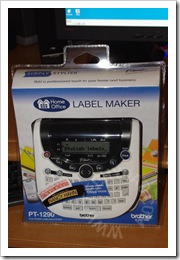 As for the Brother P-Touch, I found it very easy to operate.  After the first labels came out with tiny type, I explored the settings and found that there are plenty of options.  You can change the font size, bolding, the font itself and more.  After about three minutes, I was able to produce labels that looked just like I wanted them to look.  It’s a simple machine, but one with many options.  The previous label makers I’ve used, were from a decade or two ago.  It’s interesting to see how far they’ve progressed.

Disclaimer: I wrote this review while participating in a campaign by Mom Central Consulting on behalf of Brother P-Touch and received a product and gift card to facilitate my review and a promotional item to thank me for taking the time to participate.

Setting The Theme For The Year

Growing up, we would go to temple on Rosh Hashana morning.  Then, we’d come home for lunch before heading back for the afternoon/evening services.  During this gap, there was little to do to fill the time.  I didn’t watch TV, use computers or, in fact, use any electrical device.

The tempting thing to do was get a nap in.  My mother would always nix this idea, though.  She had a superstition that how one spent the Jewish New Year would reflect how the year to come would be.  If you napped on Rosh Hashana, you might be setting yourself up for a lazy year.

So what kind of year did I set myself up for?

I began by getting the boys and myself ready for temple.  B didn’t feel like going, so I took the boys by myself.  I’ll admit that I didn’t get to spend as much time praying as I’d have liked.  Instead, I was making sure that the boys were quiet, well-behaved, entertained and fed.  (We brought quiet toys, books and snacks with us.)

When we got home, and after we ate lunch, I began to think about what I wanted to do.  I began thinking about my “surprise” for B when she returned from SheStreams.  I had done some cleaning in the front room to get rid of and/or organize clutter.  Still, it felt like the job wasn’t completely done.  There were sections of the room that hadn’t been dusted in awhile.  Hard-to-reach, out of sight sections, but still sections I hadn’t touched.  I dove in with the vacuum at hand*.  I cleaned, dusted and vacuumed.

When I was done, I went for the boys’ room, seeking out the obscure corners that seemed to perpetually hide from the vacuum.

The next day, the boys and I headed back to temple.  This time, instead of spending our time in the temple services, we took advantage of the kids’ services.  Again, this meant less time for me praying, but it meant that the boys enjoyed the experience more and, to be honest, I think this was more important.

When I got home, I decided to tackle another room.  This time, it was the kitchen.  Again, my target was mainly the obscure areas that tended to get passed over every other time I cleaned.

So, if we were to go by the old superstition, how is my year going to go?  Well, I think it means I’ll be spending quite a lot of time with the boys and I’ll pay attention to small details that are usually overlooked.  Not a bad way for the year to go!

* When I was younger, I didn’t use any electrical device.  Since then, I’ve re-examined my religious practices.  Now I follow the “don’t work at your occupation” rule.  Anything that could be used to do work for my job is set aside.  This includes computers, phones, and writing.  Luckily, I don’t vacuum for a living, so that’s allowed.

This Monday night begins the Jewish holiday of Passover.  During this time, there are many dietary restrictions.  To adhere to these, I need to clean our kitchen (to prevent any “cross-contamination” between Passover foods and non-Passover foods).  This means I have a lot of cleaning ahead of me this weekend.

My Aloha Friday question for today is: Do you do any spring cleaning?