A couple of weeks ago, I had a nightmare.  We were camping in some snow covered location near a frozen lake.  Why we were there, I don’t know.  (Dream logic: It made perfect sense that we’d be there while I was dreaming.)  In any event, it began to warm and the lake melted.

As JSL went to play in the shores by the now-thawed water, I started to warn him to stay away.  Suddenly, the lake turned into a swimming pool with JSL on the steps leading in.  JSL toppled backwards and somehow landed into the deep end.  B, standing on the side of the pool, screamed as JSL sank to the bottom, unable to swim.  I dove in but suddenly found myself unable to dive.  All I could do was watch my son sinking to the depths.

And then I woke up.

The dream was so realistic that, even though I knew it was a dream, I had to get out of bed and check on the boys just to be sure.  JSL was sound asleep in his bed without a drop of water on him.  I was so glad that it was all a dream.

Another night, I wasn’t as happy.  That was the night that I found out that we won a ton of money.  As in over $200,000.  I collected my winnings – in cash for some reason – and returned to our house to find a big party celebrating our good fortune.  Conscious that we had a lot of cash lying around a lot of people, we hid it in the boys’ room.  Just as B and I helped ourselves to some party food and began to plan how to spend our money, I remarked to her how glad I was that this wasn’t a dream.

And then I woke up.

I don’t think I’ve ever been so desperate to go back to sleep.  I tried hard to convince myself that it was real.  The winnings were right there if only I could doze off again.  The dream was real and it was waking that was the lie.  I really had won over two hundred thousand dollars.  Sadly, it wasn’t the case.  As I gave up and got out of bed, my winnings dissolved completely in my mind.

I’d wish that you could make your dreams a reality, but that would probably extend to nightmares as well.  Given that, I’m glad that our dreams aren’t real.  Even if our best dreams fade away entirely in the morning light, it is much better than having our worst nightmares come true for even a split second in the real world.

"It came to me in a dream, and I forgot it in another dream." – Professor Hubert Farnsworth (Futurama)

I’ve had a few times when ideas came to me when I couldn’t write them down.  At one point, this might have been when I was out and about.  Of course, since the advent of texting (and, later, Smartphones), this isn’t a problem.  A quick text or e-mail to myself and I’m good to go.

Recently, ideas seem to come to me on the Jewish holidays.  You see, during certain holidays, I refrain from "working at my occupation."  I take this to mean that anything that I could use to do work for my job is off-limits.  I’m a web developer, so computers are no-nos as are pen and paper (could write down code/designs to type up later) and phones (could call in to discuss work issues).  (NOTE: I’ll carry a phone with me in case of emergencies, but it is set to vibrate and everyone knows not to call unless it is a matter of life or death.)

So what happens when I get an idea in the middle of a Jewish holiday?  That is, during a time when I can’t write it down, type it up, or use my smartphone to send a reminder to myself?  That’s when I’ve got to exercise that brain of mine to remember it myself.  Kind of like how people used to remember things before computers were all-but-grafted onto us.

A couple of nights ago, I had a weird dream.  In it, I had built a very popular Twitter application.  I was showing it to someone to demonstrate how it worked.  I’m going to leave off the "how it works" details for obvious reasons, but suffice it to say that my dream was quite descriptive.  When I woke up, I remembered it perfectly and realized that this was an application that I could actually develop.  One that people might use.

Of course, the past three days have been Jewish holidays.  (Shabbat followed by two days of Shavuot.)  Since I couldn’t record it in any other manner, I kept it in my mind up until the Jewish holiday ended.  Luckily, by then, it hadn’t been forgotten.  If anything, it’s taken root and expanded.

Now if I only had more free time to work on Twitter applications.

Have you ever had an idea come to you in a dream?

Disclaimer: The "sleeping face" image above comes from OpenClipArt.org. 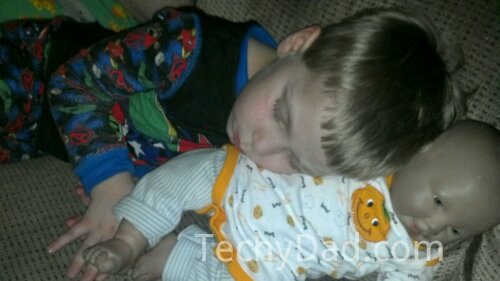 JSL has been sick the last few days.  He had a fever, was lethargic, and didn’t want to eat.  What little he did eat… well, let’s just say that it didn’t always stay in him long.  At one point, B called me at work after he woke up from a nap.  He was crying asking for his mommy.  He recognized that B was his mother, but kept asking for his "real mommy."

Later on, after dinner, I got NHL to bed.  JSL, previously, had fallen asleep on the couch.  Suddenly, he sat up and began crying for his daddy.  I picked him up and he said "Daddy?  I want my daddy!"  I asked him who I was and he answered that I was his dad.  I asked him what room we were in and he said the living room.  I asked him my first name was and he knew that.  I even asked him how many fingers I was holding up and he answered correctly.  But after all that, he kept repeating "Daddy?  I want my daddy!"  This went on for about 10 minutes while we decided whether we were going to need to go to the hospital (and, if so, what to do about the sleeping NHL in the other room).

Slowly, JSL came out of it.  He began to realize just was going on and calmed down.  He even had some fun with what just happened by saying he wanted his daddy one more time and then smiling before hugging me.  I asked him if he was having a nightmare.  He told me that he was and that he was scared of losing us.  (As he’s never lost anyone he knows to death, I think he meant "losing us" in the sense of not knowing where we are.)

In the end, we think this was the combination of some sort of waking dream and low blood sugar.  After we got him to eat some crackers, he perked up a lot.  The next day, he stayed home and went to the doctor.  The doctor didn’t find anything wrong.  No ear infection, strep, etc.  His temperature was staying down without medicine and he was eating (and acting) better.

He’s not alone in these nighttime behaviors.  NHL has had night terrors and has even been known to sleepwalk from time to time.  My parents told me about some times when I’ve walked in my sleep, talked with them, turned around, headed back to bed with no memory of the events.  One time growing up, I got out of bed, thought I was in a different room, and couldn’t exit the room.  My mother finally heard my cries and turned on the light.  In that instance, I snapped out of the waking-dream and realized just what was happening.  (I had ended up in the closet instead of the room’s door.)

My Aloha Friday question for today is: Have you ever experienced an incident like this yourself or that your kids did?

P.S. If you haven’t already, go visit FollowerHQ and let me know what you think of my Twitter application.

Disclaimer: The "Emoticons: Sleeping face" clipart above is from OpenClipArt.org.

A Nightmare Getting Ready For Bed 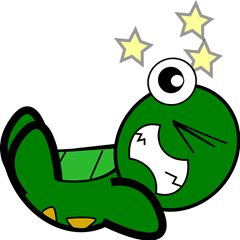 Two nights ago, it was time to get the boys ready for bed.  For some reason, NHL was complaining so B went to take care of him while I got JSL ready.  Don’t ask me why, but I decided to pull JSL’s shirt off of him while he was standing on a stairwell.  As the shirt went up, JSL lost his balance and fell.  He went clunking down the stairs and slid to a halt face down and not moving.  I screamed for B to call 911 and then… I woke up.

Yes, all of this was a nightmare.  A horrible nightmare.  Although, I was relieved that it wasn’t real, I lay awake in bed afraid.  I was terrified that, should I go back to sleep, I would re-enter the dream from where I left off – with JSL lying lifeless on the floor.  The image of JSL laying there, face down with his arms splayed, was (and remains) burned into my brain.  Though I was exhausted, I forced myself to stay awake for a few minutes.  Thankfully, the rest of my dreams were free of injured children.

Have you ever experienced a very realistic dream about your children being hurt?

Disclaimer: The image above, Turtle-Hits the Floor, was obtained from OpenClipArt.org.