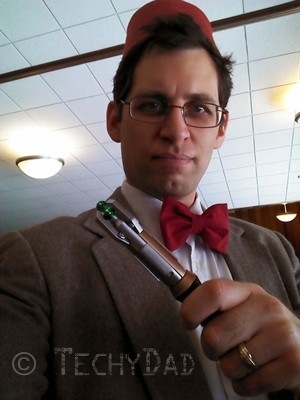 Last year, I participated in the Ultimate Blog Party for the first time.  When it came rolling around again this year, I decided to give it a go again.  So, for anyone who is new here, I decided to answer the question: Who is TechyDad?

First, of all, I’m a husband and father.  My wife is B, aka TheAngelForever, my two boys are NHL (age 10) and JSL (age 6).  I’m a web developer by trade which is a good thing since I love making websites.  (I do it as a day job and am also available for freelance work should anyone need some website work done.)  I’ve been blogging and on social media for almost 6 years.

I’m a huge geek.  I love technology (and just wish I could afford more of it).  I’m a big superhero fan, as well.  I love Star Wars, Star Trek, Farscape, and many other geeky science fiction shows.  Most recently, I’ve become a huge Whovian.  So much so that I made my own fez and bowtie so I could "become" the Doctor.  Now if only I could find my TARDIS.

For a long time, I held my geekiness in check, but recently decided to explore my geekier side with an "Extreme Geekery" series.  The first one explored how much paper would be produced if you printed out a hard drive.

I’m a big fan of Disney also.  We all loved Frozen and we’ve been to Disney World many, many, many times.  (Here’s hoping we can go again soon.)

I’ve long written about my history of being bullied.  It took me a long time to fully come to grips with that and I was heartbroken when NHL was bullied in school.

Speaking of NHL, he has been diagnosed as having Asperger’s Syndrome.  Since his diagnosis, not only have we become Autism advocates, but he has as well.  He’s learned to stick up for himself when people expect him to "just act normal" as if Autism is a switch he can flip off should he decide to.

Furthermore, as we read the many, many books and articles about what Asperger’s Syndrome is, something became perfectly clear:  I’m an Aspie as well.  When I was a kid, Asperger’s Syndrome wasn’t diagnosed.  Children were just stamped with a "shy" label and that was it.  Unfortunately, getting a diagnosis would cost money we can’t afford to spend.  As it wouldn’t help NHL at all and as I’ve clearly learned my own coping techniques, I’ll remain an "undiagnosed Aspie" for the time being.

For more reading, I’d suggest my post for World Autism Day/Month which summarized and linked to a year’s worth of Autism posts.

Other things I enjoy doing are playing video games, cooking, and reading books.

Thanks for stopping by!